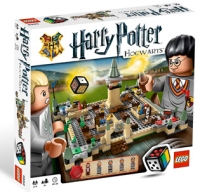 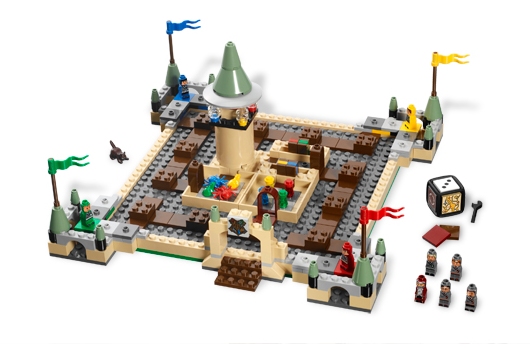 Harry Potter the Lego board game manages itself well. Each element - toy, game and film - combine to create an experience that works well and never feels forced.

Harry Potter is one of the second generation of Lego board games. It takes the basic concept that worked so well with Shave a Sheep and Lava Dragon and extends it into a more fully fledged board game experience.

The combination of block building fun and a pre-packed board is still a strong recipe for most families. Into the pot this time is added the Harry Potter theme.

The game board - once constructed which took us around 30 minutes - is a miniature Hogwarts with moveable floors, dungeons and sliding tower. Players roll the customisable Lego dice to work their way round the board to collect homework items and return to the common room.

Although the game can be played with two players, it really comes alive with the full complement of four. With more competitors in the mix there is a real sense of cut and thrust as the lead changes hands.

Because of the modular nature of the Lego game dice, families can adjust the difficulty .

Because of the modular nature of the Lego game dice, families can adjust the difficulty - and length of the game to suite. Although out of the box Harry Potter lasts around 25 minutes for players of eight and over a few tweaks can shorted or extend playtime - as well as making it more suitable for a younger audience.

These various brands coming together in once concept was potentially messy. However, a intelligent degree of restraint, along with a commitment to Lego's block set (rather than custom pieces) makes Harry Potter feel genuinely like Lego while also encompassing both board game and film themes comfortably.

You can support Ed by buying Harry Potter Hogwarts