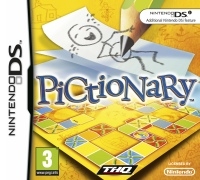 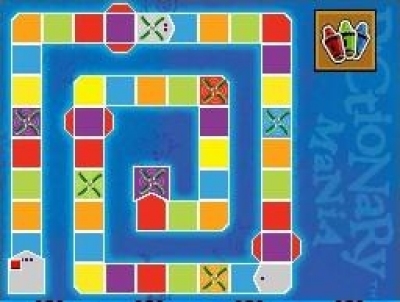 Pictionary DS took its time to arrive on the hardware that seemed purpose built for it, but the wait was worth it. It now takes full advantage of every aspect of the DS - stylus, touchscreen and even DSi camera if you have one.

Although I'm quite a hardcore board game buff, I still appreciate the anyone-can-play nature of classic Pictionary. I like the way it uses our general inability to communicate with anything other than words and symbols to create a frustratingly addictive game players of any age can enjoy.

I've been keeping my eye on the upcoming uDraw tablet version of Pictionary for the Wii, although I'm not too sure how well that will work with lots of players. In the meantime though, the DS version has been released in advance of next year's Wii console game. And I was surprised how well it worked - in fact it was almost as if the DS had been designed purely for this one experience.

In some ways I guess it shouldn't have been such a surprise, what with the DS's touch screen, but the surrounding features and the use of the DSi's camera make this version of Pictionary hard to beat.

It has plenty of competition as well - and not only the upcoming uDraw Wii version but also Bakushow (DS) and PictoImage (DS). Bakushow was the most novel of these, as it let you create your own game out of a few basic drawing and sharing tools. PictoImage on the other hand is more of a direct imitation of Pictionary - as most reviewers noted when it was released.

It's good to see that THQ didn't rush their officially licensed version of the game.

Both those games were released a good couple of years ago, and it's good to see that THQ didn't rush their officially licensed version of the game. The result of that time and consideration is the best of both worlds. Not only do you have a strong version of Pictionary itself - in both single player and multiplayer form, but you also have a Bakushow-like ability to create your own clues.

The ability to "fix" popular board games with additional rules and balancing is a popular pastime of the board gaming community - me included. I've spend many happy hours play testing various versions of Monopoly that try and make it a more skilful game - essentially tipping the balance towards bidding for property and ensuring fines don't simply circulate between players.

Pictionary has a trump card here, and one that wasn't available to the likes of Bakushow and PictoImage when they were released, in the form of the DSi camera. This means I can not only craft my own clues, but also base them on photographs rather than drawings. It has kept me busy for hours and hours, as I prepare family specific clues ready for when my grandchildren come to stay. They literally shrieked with laughter to see their family pictures being used in a DS game.

As well as this the game itself comes with over 3,000 original clues, grouped into Adult (ed: I'm assuming grown-up rather than top shelf here) and Junior sets. There are also a wide variety of game types, ranging from the single player Solo and Quiz modes, to Pass and Play and Wireless Pictionary and Mania modes that both support up to four players.

The Pictionary Mania mode is particularly interesting and offers a bunch of new rounds: Get It Straight, Shape It Up, One Line, Ink Limit, No Peeking and Off Hand. I liked off hand which makes drawer use their "wrong" hand to draw with.

I didn't think I'd ever hear myself say this but Pictionary DS has now become my favourite way to play the game.

The solo games work pretty well too - but really only serves as practice for those multiplayer games that are the main event. It's here that the DS has an advantage over the uDraw tablet for this game as families are unlikely to own more than one and to be able to draw simultaneously as they can using up to four DS's here - and with just one copy of the game although you do need one copy of the game each.

Even the limited field of view works to the DS's advantage here as it makes it hard for other teams to cheat by looking over your shoulder - one of my long term bugbears of Pictionary. And because you have to type in your answer, there's also no quibbling over who shouted out the answer first - and no overhearing of other team's part answers.

I didn't think I'd ever hear myself say this but Pictionary DS has now become my favourite way to play the game. Add to that the great clue customisation features that use the DSi camera and it's a pretty impressive package. Although I play it with the rest of the family - kids and grandchildren - I think I'm the one who has spent the longest on it setting up my perfect set of family themed custom clues.

You can support Ed by buying Pictionary