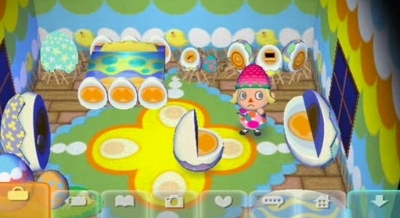 Animal Crossing: Let's Go To The City may seem an unlikely past time for a board game family, but it slowly drew us in and wrapped us up with the minutiae of its rich island. This is something we'd not experienced in a board game.

Animal Crossing: Let's Go To The City has easily been the most eagerly anticipated game for us, since making the foray from board games to their digital counterparts. The kids seemed to "get" it straightaway (or at least were not bothered by the issue of "getting" it): in their respective half hour debut slot they each managed to achieve a lot. Iona discovered a shop selling clothes and fabrics and had already produced some designs of her own. Aurora had made a full exploration of the town including the municipal buildings.

I, on the other hand, did not "get" it. I think the mistake I made was thinking it would be another Little King's Story, a game that we all adored. I got seriously worried when it became apparent the town does not expand over time: surely this town ain't big enough for the four of us? And the city is even smaller! Worse, there just didn't seem to be much to do and little guidance on what there was to do.

My unspoken fears seem to be confirmed about a week later when the kids lost all interest and started playing other games. I think they'd been putting on a brave face about how ugly their avatars were but had finally been put off completely. I was bothered by this and set out on a mission to achieve something, anything, in the game to find a hook for them.

The prospect of paying off a modest mortgage quickly appealed and I was soon mastering the art of fishing. I had a slight problem in that I tended to play a night when the only market for fish (Tom Nook's shop) was closed and considered turning back the system clock to be cheating, so it took a while longer than I'd hoped to aciculate the required Bells.

I somehow became completely and utterly obsessed with collecting furniture to make my house look groovy.

The menagerie of town residents (or "freaks" as I secretly called them) sometimes tried to engage with me but I simply ignored them. I'm just not a social animal, I reasoned. Items I collected were simply dumped on the floor in the house, having been admonished early on by the kids for leaving it as litter outside my house. The kids, on the other hand, were gutted when they discovered that one resident had moved on and they would not let the same happen to their beloved Kikki the cat.

With my debt settled, the offer of a larger house was accepted. Now what? Actually, I'm not exactly sure what happened (I know that sounds lame) but I somehow became completely and utterly obsessed with collecting furniture to make my house look groovy.

Previously-shunned residents were now my best pals in the hope that they would gift or sell me their stuff. When I realised that furniture sometimes grows on trees I could hardly walk past a tree without shaking it. Naturally I became a daily shopper and Nook's and had soon discovered the seedy delights of Redd's furniture emporium.

When I realised that furniture grows on trees I could hardly walk past without shaking it.

In the end it was three things that got the kids hooked again. First, the new house-proud Dad and his gifts of unwanted items. Second, discovering that we could wear Mii masks so we could look like our 'true' selves. Third, Dad paying off the kids' mortgages through the proceeds of fishing: bigger house means more room for more stuff.

We have now found ourselves in a comfortable place where we collect and exchange furniture, furnishings and occasionally clothes. Occasionally we go to a K. K. Slider concert to collect music to play on our music systems. We all long for a bigger house and to this end I've left my legacy to the kids.

I discovered how to grow trees from foreign fruit which will bear foreign fruit which sells for a high price. But rather than sell the produce I used it to plant even more trees, over a hundred now I reckon. I don't think I'll be playing Animal Crossing much if at all in the future but I know the kids will and those trees will provide for their future.

Jamie Collins wrote this Board Gamer article under the watchful eye of Ed Stephens.