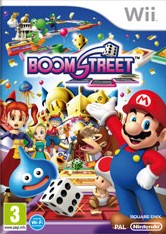 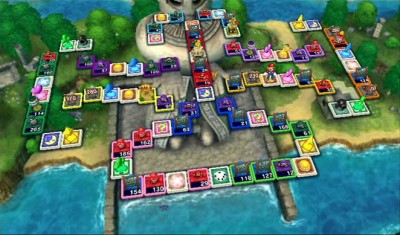 Boom Street is a charming board game for the Wii. While it makes good use of the advantages a console brings, it fails to translate what really makes a board game social and fun.

Boom Street (also known as Fortune Street in the US) is an odd mix of characters and settings from Nintendo and Dragon Quest games, wrapped up in a board-game style experience very reminiscent of Monopoly. It involves purchasing property around the board and then charging other players who land on your spaces. The introduction is keen to impress that Boom Street has a long and cherished history among gamers going back to the early 90's, but it was no surprise to me that this was the first time the game has appeared outside of Japan, since I've never heard of it.

I like my board games to have a bit of complexity and non-linearity. Boom Street's boards are many and varied and seemed to offer some variable routes so I was instantly intrigued. I wasn't sure what a board game on a console would really have to offer over the physical variety but I was keen to give it a try.

Boom Street's boards are many and varied and seemed to offer some variable routes.

One immediate advantage which this game offers over a traditional board game is that I could try it out for myself before involving any other players. Since I like them complex, the first attempt at any board game in my house is usually a comedy of errors as well as an invitation for an evening of arguing over unfamiliar rules. At least with Boom Street I could play it alone before inviting company and by doing so be able to provide an informed introduction to the game. Any suggestion that I do this for the advantage of sneaky practice is entirely untrue.

However as a single player experience it's an extremely irritating game. Boom Street feels the need to fill the space between turns with random comments from the computer-controlled players. This is presumably to simulate some of the social interaction of a board game but for me it couldn't replace the presence of real banter and simply provided another set of screens I had to click through to get to my next turn.

Playing alone gave me a good grounding in the rules, although I found the tutorial to be extremely off-putting. The board provided in the tutorial is extremely basic and linear and gave me an early impression that the game would have little room for personal tactics. However I could see better boards later down the line and so I persevered by inviting friends to play the game properly.

Compared to a traditional board game, Boom Street makes good use of the benefits which an electronic device brings. Property can be upgraded through various actions, including special pickups, which add bonuses to each. Some of these increase the value of all owned properties by a percentage - something which would be very time-consuming to work out on a traditional board. However despite having this electronic advantage for quick arithmetic, the game shot itself in the foot by making us all sit through an unskippable sequence of each of the properties being upgraded one at a time. By the time it had finished I could probably have worked out the figures on paper.

As a board game I found it lacking.

As a board game I found it lacking. There is the promise of non-linearity in the board design, but in reality player movement is limited to making left or right decisions at certain junctions. Most of the time is comes down to accepting a random roll and then making the best of the outcome. I dislike board games which limit player input to merely rolling dice and moving according to the result. It feels like the result is arbitrary and I am simply a participating spectator. Boom Street rarely gave me the opportunity to make a significant contribution to my own success or failure and worse still, the process of clicking a button to progress is somehow less entertaining than the tactile joy of rolling real dice.

Even as a videogame it doesn't offer very much. If Boom Street were a bonus game mode found next to one of the casinos in Dragon Quest I would understand its purpose entirely since it is a passable, if repetitive, sideshow. But, as a standalone game it really didn't offer enough to hold my attention.

Having given it a good try, I still don't really understand the appeal of a board game recreated on a console. It it were on a handheld I could see its value as a travel game, but at home I would much rather we all sat around a table with a board between us, so we can watch the faces of our opponents. Facing the same direction and waiting for a screen to explain to us the fun we're not having seems a much lesser experience. For me, this is no substitute for the real thing.


You can support Ed by buying Boom Street

Chris Jarvis wrote this Board Gamer article under the watchful eye of Ed Stephens.