Other GamePeople columnists have reviewed this from their perspective - huh?:
Multiplayer Gamer (Wii) 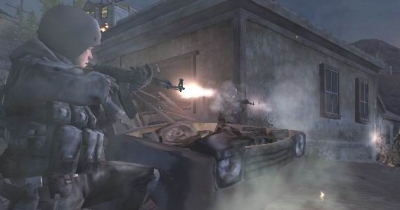 Call of Duty 4: Modern Warfare arrives on the Nintendo Wii as Modern Warfare Reflex. The best selling shooter on 360 and PS3 turns into this masterful port on the Wii from the team at Treyarch. The full experience from the big Xbox 360 and Sony PlayStation consoles has been squeezed into the diminutive Wii. Grab the nuanced aiming of the Wii-mote and choose from the familiar arsenal of weaponry as you fight through a twisting story with sophisticated technology and firepower. Add the online Nintendo Wi-Fi Connection support for multiplayer modes and this is an impressive package.

For some, video game experiences are about the technology - graphics, sound, frame rate and all that. But Modern Warfare Reflex on the Wii revels in something different - immersive controls and game play. The simple introduction of the Wii-mote presents a perfect compromise between the analogue mouse and keyboard PC controls and the more awkward dual sticks of the 360 and PS3. You can have all the fine aim of a mouse but the freedom to play in your living room away from a desk.

Those who want to simplify things further can reach for the Classic Controller, or opt for the Wii Zapper. Modern Warfare Reflex has been setup to explicitly support the Wii Zapper and works surprisingly well - often adding a little added sense of realism.

The game continues the success of Call of Duty 3 on the Wii that brought new levels of realism and game play alive. Features return with it such as the Squad mate two player mode where one person controls the movement and shooting or one soldier while a second offers supporting fire. It's a simple idea but one that creates a whole range of game play options. Newcomers benefit from the help of more experienced comrades, and the hardcore can share the experience first hand with girlfriends and family.

In addition to the local two player mode, you can experience the pleasures of full multiplayer via the Nintendo Wi-Fi connection online mode. This not only enables players to compete across the world but supports perks, challenges, kill streaks, and customisable classes.

Players familiar with the series will appreciate the attention to detail. Here on the Wii, as in the 360 and PS3, we have the same authentic advanced weaponry. Modern Warfare Reflex features an impressive arsenal of over 70 weapons and equipment. This ranges from the stock in trade assault rifles with laser sights to claymore mines and more exotic caliber sniper rifles and M-249 SAW machine guns.

Visually, things continue to impress, although the action has dropped to 30 FPS (frames per second) as opposed to the big console's 60 FPS. Despite this the fidelity and depth of field on offer create an experience that is as compelling as any big budget production.

With all the controversy of scenes from Modern Warfare 2 on 360 and PS3, some would question whether you really want to bring this experience to the Wii. The genius here though, is that on the Wii the game is more likely to be played in a family space and with other people in the room. Rather than mere shock value, the issues raised are unavoidably discussed and better understood. Obviously I'd want to make sure only family members of the right age were in on the gore, but beside that I have really enjoyed the interesting topics the game raised - often discussed over breakfast.

Modern Warfare Reflex could be seen as a risky release on the Wii. But for those who can look past the nay-sayers this is an excellent buy and something of a rarity. The range of game play options on offer will actually make this the preferable version for many family players. The Nintendo Wii needs more weighty games like Modern Warfare Reflex which make it an essential purchase.

You can support Jan by buying Call of Duty: Modern Warfare Reflex