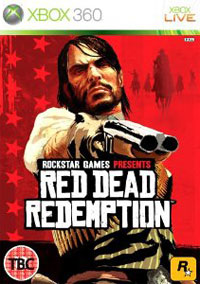 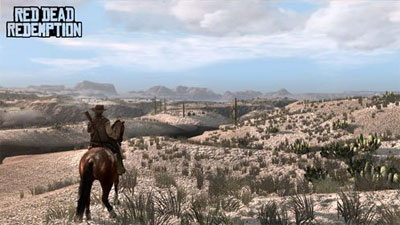 Red Dead Redemption wants to be about shocks and controversy, but underneath there's a story we can all relate to - a father wanting the best for his family at any price.

I've never really been a fan of the stories told in Grand Theft Auto. While they've been terrific fun in an excessively violent sort of way, I've never taken them seriously. Their crude humour dampens any emotional effect the story might offer. Red Dead Redemption feels more mature though. While it still offers humour and familiar elements from the Grand Theft Auto series, it does it all with a grownup head on its shoulders that makes the whole experience more profound.

When I first played Red Dead Redemption I didn't really know what to expect. A friend and I met up via Xbox Live's online chat but we didn't actually talk much. We were too busy being enthralled by the open world in front of us. Every now and then one of us would comment on something in the game world, it wasn't long until we realised that we were both able to go entirely different routes in our exploration.

For the following few days we played separately and shared our experiences afterwards. We often discovered that we'd both explored totally different sights with very little overlapping. Of course the further we played, the more we encountered similar incidents but the sheer number of initial options felt revelatory.

It was amazing to feel that we could both play the same game but experience so many different things. While I was racing my steed, my friend was coming to the aid of a woman being assaulted at the side of the road. It was an experience that reminded me that a game's narrative can offer so much more variety than the straight line of a film. We both had similar motives in terms of wanting to come to the aid of the local people but if one of us had gone a darker route, it felt as if we'd have experienced an entirely different life in the game. Much like real life in many ways.

Walking around as John Marston, there were many things to do. Some were pivotal to the storyline but many smaller events were simply down to your own moral compass. I'd roam the desolate land and come across a poor stranger that had been assaulted. It was up to me whether to help them or simply walk on and ignore their plight. The game never really rewarded me for my efforts in these cases, other than a few dollars in my pocket; it was all down to how I wanted to be. In one case I made a mistake and trampled over a dog. I felt terrible and instantly had to reload my game. It might not have affected anything technically but my conscience made me feel deeply guilty.

Despite all this though, I still felt alone in the world. Unlike the hustle and bustle of Liberty City in Grand Theft Auto IV, the land of Redemption feels empty for much of the time. Riding towards a lone, dusty town feels like an accomplishment and the perfect opportunity to stock up on supplies.

But this laid back pace hides a darker tale within - and one that I will have to spoil in places to explain. It's this tale that means Red Dead Redemption will stay with me for a long time. John Marston is a troubled man. He's been forced to help government agents hunt down his old gang, or else his wife and child will be killed. It's a tragic tale of dubious morality.

Marston is far from a good man though. His morals are frequently grey - idly standing by as various atrocities are committed. I played him as a man trying to lead as good a life as possible, trying to leave his old life behind. It all felt quite doomed - as if the game and Marston know that his time on this earth is limited.

In the concluding stages there's a feeling that all might be OK for John and his family. They are reunited and appear happy and content with their life as ranchers. But as John spends much of his time teaching his son how to be a man, how to hunt and to round up the herd, there's always a foreboding feeling of doom. It's as if he knows he has very little time left.

It's something that having suffered loss myself I should already appreciate but often don't quite fully grasp.

It's something that perhaps as consumers of media we don't really take on board in our lives. I've seen many films where I have that foreboding feeling that the main character should take advantage of everything their life currently offers. While modern life is increasingly fast paced, life in the Wild West depicted here is much more laid back.

It allows more easily for the opportunity to spend time with loved ones and to prepare them for the future. Red Dead Redemption is all about spending your time wisely as life is short and unfair. It's something that having suffered loss myself I should already appreciate but often don't quite fully grasp.

Then they come. The US army betrays him and come to kill him and his family. John dies protecting those closest to him, an honourable death if ever there's one and hopeful that his son Jack will have the life that he was unable to enjoy.

Seeing this through Jack's eyes really moved me. After John's death, the player takes control of Jack and is staring at the graves of both of his parents. There, Jack is given the opportunity to avenge those who killed his father. It's easy to achieve, but oh so bittersweet once the trigger is pulled.

It might not offer the most intelligent of tales but the wide array of moral quandaries made Red Dead Redemption a very thought provoking game.

I'd become attached to John and the world of Red Dead Redemption felt that bit more corrupt and evil, even though I had technically 'won'. Most of all though, I felt great sadness for Jack. He was alone in the world and while he had spent his teenage years reading books, here he was killing bad guys. Just like his father. The tale of the cowboy going full circle it seems.

While I can see how a sequel is likely for the title, I don't want there to be. I was attached to John's plight. It might not offer the most intelligent of tales but the wide array of moral quandaries made Red Dead Redemption a very thought provoking game.

You can support Jen by buying Red Dead Redemption

"For as long as I can remember I've been fascinated by games that can provoke an emotional reaction. I enjoy a game that can tell me a strong, emotive story even if sometimes the game mechanics behind it are weak."