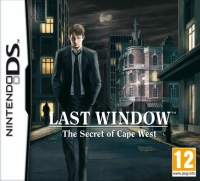 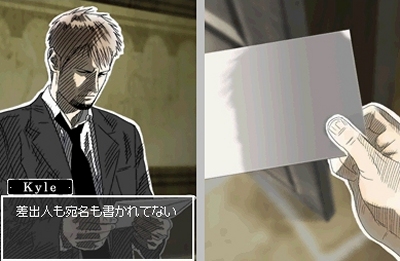 Last Window's branching story and newsprint presentation got me involved in what ended up feeling more like a mystery novel than a DS game. I was surprised how much I enjoyed sitting down for a few hours to play something I could have easily written off.

I've got a soft spot for Hotel Dusk and Mr Kyle Hyde. It was one of the first video game song reviews by Rebecca Mayes I heard on Game People and one of the reasons I started my column. In Last Window you get to find out a little more about Hyde while you pursue the Secret of Cape West in true Colombo fashion.

It's a lot like reading a novel with plenty of text and a slowly unfolding plot - you even hold the DS sideways like a book. As the storyline twisted its way through dialogue and animated events I found myself being unusually drawn in. I'm not a big fan of mystery novels, and not really that big a video gamer.

Being able to sit down over lunch and dip into the story was a good fit for my day though. Especially now the kids are at school and I have a little more time - the moments when my youngest isn't haranguing me.

It wasn't until a few hours in though that I realised some parts of the plot had kind of fallen away. Then it struck me, my decisions were really affecting how the story was turning out. Whereas I found Hotel Dusk a little rote - I'm still not sure how I found the time to play it back then - Last Window felt much more like a game.

Then it struck me, my decisions were really affecting how the story was turning out.

Although I don't think you would have had to play Hotel Dusk to enjoy this, being familiar with the characters and art style of the game helped a little. It all looks like it's been hand drawn in pencil and then cut out and animated. An unusual way to tell a story, but it did fit quite well with the dark events that unfold.

The most unusual aspect of the game is that I managed to finish it. I can't say that very often. And at the end there's a nice touch. You're presented with a written transcript of the particular story you've just created. It's funny to read back through it, but also you start to spot things you may have missed - it made me want to go back for a second try.

Although I enjoy the more puzzle focused Professor Layton games, Last Window's slower more considered story telling was much better to relax with over lunch or in the evenings. It felt a little like reading a magazine - and I could do it while still watching the TV with half an eye.

Last Window looks gorgeous and has enough tricks to keep even slightly disinterested players like me playing to the end.

You can support Josie by buying Last Window: The Secret of Cape West

"As quite a domesticated mum of three I love the thought that Xbox 360, PS3, Wii, DS lite and PSP games can have a practical role around the home and enriching everyday life but also fun to chill out and unwind with too. Here are my Domestic Gamer review, join me to read about all sorts of games, from cooking, health, and family ones too."