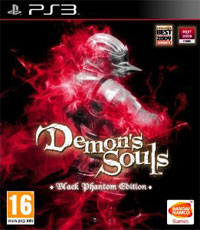 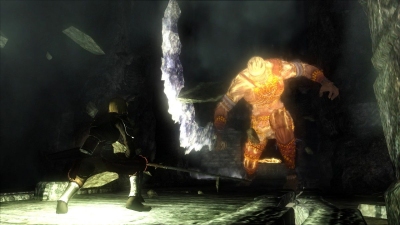 Demon's Souls PS3 hits you like steam train before crushing you in its wake - daring you to try again. And as slave to the thrill of its experience you will indeed plough in hours here. Without save points, steady progression, a pause button or anything one might reasonably expect, Demon's Souls creates one of the strongest connections to a videogame role I've experiences for many years.

Demon's Souls is finally released in Europe after higher than expected sales in North America and a hugely positive critical reception. Any chance to don demon hunting gear for a new type of adventure fills me with anticipation, especially if it's as hard to come as this.

Although developed by the Japanese developer, From Software, Demon's Souls is very un-Japanese in its approach to the role playing genre. It turns its back on the usual lavish cut scenes and adolescent characters in favour of a dark and threatening world more like something from a big western studio.

Looks are deceiving though, as it few cues from western role playing games. Demon's Souls delivers an adventure with a unique feel and innovative community features that make even the single player a shared experience.

It might boast many innovations, the story doesn't match that level of creativity - starring an old evil that's invading the world and casting you as the last hope of humanity. The lack here doesn't harm the experience. Characterisation is build more around how you react to its considerable challenge than any higher narrative aims.

Even if the thousands of Internet voices hadn't already warned me about the impenetrability of the task ahead, the tutorial left me under no illusion about what I would face. Within minutes of starting I had already faced a boss that had killed me with one blow, leaving me wondering what chance for the fate of the world if their greatest warrior could be slain so easily.

I was a little thankful then to realise that the initial battle was a ruse to transport me to the spirit world and introduce me to the game proper. As a phantom I would return to the world above and kill the corrupted, letting me harvest their soul power and ultimately regaining my body.

Each foray into darkened corridors was as terrifyingly difficult as the last.

Each foray into darkened corridors was as terrifyingly difficult as the last. My initial strategy of marching from the start to the finish proved unsuccessful in light of the hordes of dark creatures, many of whom could easily kill me for a second time. If that happened I would be back at the beginning again with the dungeon and its creatures reset. There are no save points, no pause menu and so running into trouble could easily rob me of an hour of hard fought progress.

With the usual safety net removed decisions have a real cost. Role playing games try to give you consequences that you care about, perhaps providing an "axe of maiming" or the loss of a party member, but never really stops you progressing. Demon's Souls absolute penalties drove me made as I saw my precious game time thrown away with each death. Harsh, but such a powerful experience.

With each journey I learned a little more and eventually a strategy for progression emerged. If I could take my soul power back to the Nexus, I would be able to upgrade my abilities and weapons and then return with a slightly better chance of survival. This lead to what role play fans call 'the grind' with many short sorties just to level up - with the promise that eventually I could explore every last corner of the dungeon and perhaps find that ultimate weapon.

Demon's Souls certainly played with my expectations. Without dialogue or story the game is one of survival and exploration. But with its sharply realised risk/reward mechanic I found it easier to dress-up as the hero here than in other kinder story driven games. I could feel the avatar become a true representation of me in the game world, tied closely to my own recklessness, patience and diligence.

Without dialogue or story the game is one of survival and exploration. But with its sharply realised risk/reward mechanic I found it easier to dress-up as the hero here than in other kinder story driven games.

This is all joined by the community features, which match the main game for innovation and their ability to create a real sense of personal interaction. Throughout Demon's Souls you come across written notes warning of danger, but these aren't from the developers. Instead they are left by others, uploading their experiences to the Demon's Souls servers. If you've just been surprised by an ambush, surely you should warn someone? That is your choice though, because you can just as easily say nothing or mislead. It's a simple idea that plays to my mischievous role playing nature.

I can't think of many games where I've spent 12 hours exploring the first level and I've probably spent an equal time just thinking about Demon's Souls and coming with elaborate strategies to beat it.

Demon's Souls is the ultimate expression of a desire to role play. Whilst it won't be an experience everyone enjoys, for genuine dress-up gamers it will suit you down to your +10 fire-defence sandals.

You can support Jon by buying Demon's Souls