Papo and Yo PS3 Review

Papo and Yo PS3 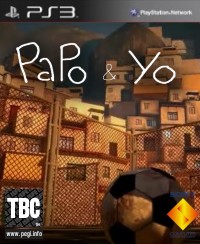 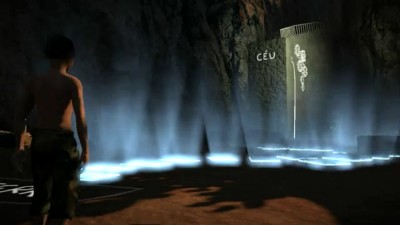 Papo and Yo wears its more-than-entertainment credentials on its sleeve. It's a game about the fear and pain of growing up with an abusive and alcoholic father. Unlike other games I've reviewed here, I know this to be so not because of what I've read into the experience but because that's what creator Vander Caballero has been vocal about in the build up to release.

My journalistically hard heart was a little suspicious of such earnest postulating before I played the game. Apart from anything else, Papo and Yo 's novelty is an indictment of the current state of video games -- both what we expect of them and what they try to offer.

The game itself is not unlike the companioned exploration of Ico or spatial puzzles of the Lego games. It's a platform game in the main, meaning you are tasked with exploring the world, triggering switches, lining up boxes, running and jumping. But unlike other platform games it is the relationships to the other characters in the otherwise sparse Brazillian favela environment that define the experience.

You play Quico, a young boy who is tasked with herding a large red monster with a fiery temper through the world. A young flighty girl, Alejandra, guides you towards a mountain top where the monster's anger will be sated. Then there is a toy robot, Lula, who travels on your back helping you jump further.

Through conversation, body language and fleeting interactions these four became inextricably bound as a family unit in my head -- son, father, mother and sister. The characters were unfamiliar and odd but their discourse could have been lifted from any day of my own family's life. Who is in control? Do you know me? How long will this last? I need my space. I need you near. How do I leave? What if we break this?

"Sometimes there are things you can't fix."

While the game uses interaction and storytelling to firmly stick to its specific and heartbreaking scenario of domestic abuse, its success for me is beyond these borders. In addressing his childhood so honestly and openly, Caballero confronts us not only with the horror and pain of his situation but also our own familial failings. We hurt each other when we'd planned to take care, we lose control at just the wrong moment and we fail at being what we imagine a family should be.

So when Caballero, through Quico in the game, stares into the abyss and realises that "sometimes there are things you can't fix" it resonated for me as well. We inherit our family situations before we are even conscious of them. They threaten to define us as much as nurture who we are. They are the great tension of life, the people we can never quite leave behind.

But sometimes the failure or abuse is so great there is nothing left to do but leave. It is around this fractured family that Papo and Yo revolves. It's the gaming equivalent to God's capture by the Philistines when they take the Ark and for a night. He finally reaches the point with his people, his family, where the only remaining response was to leave and to be lost.

In the game, unlike our habitual reading of Samuel, we are unable to skip to the morning after. We have to stay and play in the knowledge that absence from the family may be the only appropriate decision. However, in the darkness of that choice we find imagination and playfulness as our ally. The world of Papo and Yo has a playroom quality to it that eloquently speaks of Quico's heartbreaking coping mechanism and the power of dreams to create possibilities.

By the end of the game, I had not only reconsidered the breaking points of family life, but had revisited my own less extreme childhood and recalled how I coped with it all. At other times my thoughts were turned to my own children's playful engagement with life and jostling with family relationships. I renewed my desire not to inoculate them from hurt, danger and harm but to equip them to deal with it, and with that admit that some of their difficulties would inevitably come from me.

First published on Thirdway in 2012.

You can support Andy by buying Papo and Yo