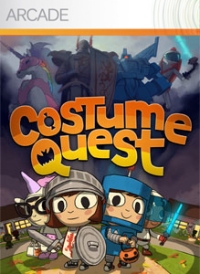 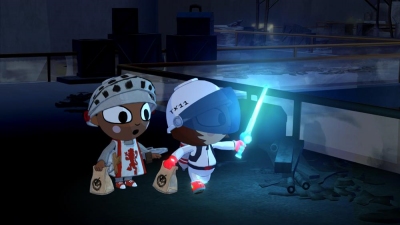 Costume Quest's confidence and comedy is infectious. What might have otherwise been a derivative adventure, in the hands of developers Double Fine becomes something homely, loveable and fun.

There aren't many video game creators I know the name of but Tim Schafer is one such fellow. I happily wasted weeks of my youth, when I should have been doing school work, playing Monkey Island on the Amiga.

Back then, I just liked the way these games felt to play. Guybrush Threepwood simply became part of my imaginary world as I frequently entered the fantasy created by the game. It was easy to slip into, funny to play and actually quite enjoyable to watch as well.

Later I realised that this wasn't some happy accident, but resulted from the talent, sense of humour and common sense of Schafer. Having not played many games after Commodore finally killed the Amiga (ed: top marks for persistence) I still haven't gone back and played Psychonauts or the more recent Brutal Legend, but from what I hear those experiences happily parallel the writerly feel of Monkey Island.

Costume Quest is his latest game and felt like a homecoming for me. Now I'm playing more games again I'm aware I have a limited amount of time which makes me a little picky. Costume Quest's simple premise and easy banter overcame any of my qualms about wasted hours. In fact, my first session extended way into the small hours before I could tear myself away.

It's an adventure role-play game where you are a child out trick-or-treating with their twin. After your sibling is mistaken for a piece of talking walking candy by some monsters and kidnapped, you are tasked with a rescue.

Gameplay is the usual adventure role-playing fare. You explore the local neighbourhood collecting items and battling monsters. The twist is that you slowly build up an arsenal of Halloween costumes each with their own special abilities. This helps you fight the monsters you meet around the place who are trying to steal all the trick-or-treat sweets.

Costume Quest has a confident, amiable quality that makes the whole thing fun.

I've played this sort of experience many times before, but Costume Quest has a confident, amiable quality that makes the whole thing fun. Odd to say I know, but a lot of games I play these days feel more like busy work than leisure.

Double Fine know exactly what they are doing here - both in terms of storytelling and gameplay. Costume Quest has a character all its own. It nonchalantly throws away stellar one liners in writing that proceeds at its own pace. Not being able to skip much of the dialogue seemed odd at first but meant the writing could proceed along it's own comic timing.

I like that Double Fine have the confidence to do this even though they risk enraging the gaming masses. They walk their own path visually as well, falling somewhere between Charlie and Lola and The Simpsons. And somehow, without moving mouths these various characters - both the good and the bad - become entirely believable.

Whether it's the sibling rivalry that counterbalances the fear of loosing a family member, or a henchman who is simply trying to do his middle management job as best he can, the world is full of character. There is an ease to it all, that made me realise how worthy and try-hard most video games are.

The game itself proceeds at a happy pace. Each area brings its own challenges and side quests. These are matched by access to new costumes and badges that enable you to customise your growing party of heroes in a variety of ways. Costume Quest keeps this simple so there is always a clear cause and effect for each of your choices.

Do yourself a favour and put your gaming time in the hands of a game like this.

The fights themselves involve selecting different costumes beforehand, then taking turns to attack and defend. Pressing the right button in timely fashion will help you on your way here, as will some sensible tactics about how to use your different powers.

It all means that Costume Quest trots easily along and keeps you well entertained. It's a game that oozes quality and actually feels the closest thing I've found to the old Schafer creations, only Castle Crashers (360) comes close - even Monkey Island (iPhone) somehow lost something in translation.

Returning to invest time here reminded me why I used to play games. Costume Quest is that rare find of a video game that understands what it is. But more than that, it is a game that also understands what you need as a player, and then delivers on both of these by the bucket load.

Do yourself a favour and put your gaming time in the hands of a game like this.

You can support Andy by buying Costume Quest