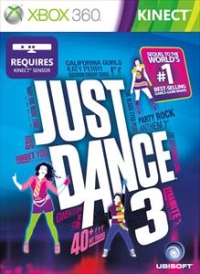 Other GamePeople columnists have reviewed this from their perspective - huh?:
Domestic Gamer (360)
Fitness Gamer (Wii) 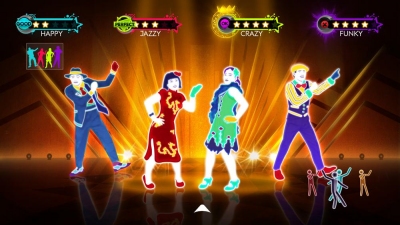 Just Dance 3 brings accessible dancing to Kinect with its four player simultaneous entertainment. The big question is whether the Kinect controller can cope with all those sweaty bodies. Either way, these full body theatrics just wouldn't be possible on the PS3.

When a new console or controller is launched, like the Wii, PS3 Move or Kinect, I basically get pretty excited. The chance to play games in a different way, or to play games that look and feel substantially different to what I've known so far injects fresh enthusiasm for my old hobby -- that at times I can feel like I'm growing out of.

The problem though, is that this novelty soon fades as the new experience becomes familiar. Even my enduring affection for the revolutionary Wii-Sports experience eventually gives way to the usual grind of gameplay. I still play Wii-Sports, and the follow up Wii-Sports Resort, but the hairs on my neck no longer stand up.

While Nintendo have so far been unable to match the high water mark of Wii-Sports and Wii-Sports Resort with more in-depth gaming experiences, I have been impressed with Microsoft's determination (and deep pockets) to do just that with Kinect.

This enthusiasm for the gameplay opportunities created by the unusual control method, seen in the second wave of games like Kinect Sports 2, Dance Central 2, Disneyland Adventures, is rubbing off on their third party (not in-house) developers. Just Dance 3 joins Rise of Nightmares as one of these more ambitious Kinect experiences.

Coming late to the full body, controller free dance game party has benefits for Just Dance. Rather than trying to match Dance Central's exacting requirements, as Dance Paradise, Dance Masters did at launch, Just Dance 3 has been able to stick with its quick and easy gameplay.

Free from the desire to please more hard core players (and dancers) this feels like a much better fit for the Kinect audience.

The irony is that, by sidestepping the need to please more hard core players (and dancers) this feels like a much better fit for the Kinect audience and controller. Just like on the Wii you can drop in and out of a dance at will and compete with up to four players dancing simultaneously. But now you are also offered modes that ask each of the four players to pull off distinct choreography -- not only a greater challenge, but also much more theatrical again playing the Kinect's theatrical strengths. And of course the dance detection is the full body not just your hands as it was on the Wii.

Complementing these design choices is a greater understanding of how to get the best out of Kinect. The simultaneous four player tracking alone was something that quickly vanished from the first wave of Kinect games. Whereas early Kinect games like Dance Central focused on accurate body tracking, the new titles are able to expand their repertoire.

You see this again in Just Dance 3's move creation mode. Here you can record yourself dancing a particular move and then challenge your friends to pull of your choreography. It's a simple addition, and not entirely new in the world of gaming, but in the more theatrical Kinect games this feature offers many hours of entertainment alone. It mirrors, what seems to be, the natural instinct of young girls (and boys) to make up and meticulously rehearse their own versions of dances they see on TV.

While I am looking forward to the high production values (and new two player mode) of Dance Central 2, the simplicity and child friendly nature of the Just Dance brand - sensibly shaped and clothed dancers in particular - is actually more exciting for me and my family.

Reduces the risk of injury as players flail around during the more ambitious dances.

Also, removing the controller happily reduces the risk of injury as players flail around during the more ambitious dances. With Just Dance 3 clashes with be skin vs skin rather than hardened plastic vs flesh.

With other in-house Kinect games arriving at the end of the year (Starwars Kinect, Disneyland Adventures and Kinect Sports 2) as well as more from third parties (Rise of Nightmares, The Gunstringer and Fruit Ninja Kinect) it's a good time for the not-so-new controller.

It would be easy to see this as good fortune for the Xbox, but it's actually the result of a lot of hard work - as well as hard belief - and a credit to Microsoft's determination and commitment to the controller.

You can support Andy by buying Just Dance 3