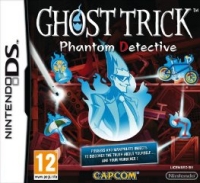 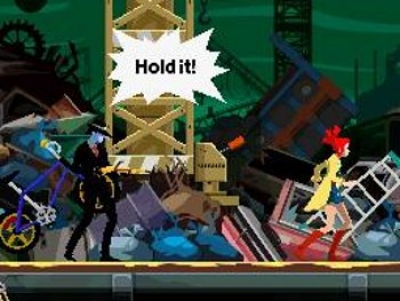 Forget what you know about Ace Attorney, Ghost Trick is fresh, logical and engrossing. The only comparison that does justice to its story, visuals and puzzles is Portal.

Ghost Trick is from Capcom's Shu Takumi, the mind behind the Ace Attorney Phoenix Wright courtroom mystery games. I've never really clicked with these types of adventures on the DS. They seemed too similar to the 16-bit old point and click adventures I used to play. What's more, just like those games Ace Attorney seemed to make leaps of logic that I could only ever figure out with trial and error. It was all a little too close to the "use pulley on chicken" scenario from Monkey Island.

Ghost Trick: Phantom Detective though has a very different premise, not to mention super-stylised visuals and a story that pulls no punches (although here at least Phoenix Wright is its equal with unrepentant stories of personal tragedies).

If you've played the role play game The World Ends with You, you'll have a good idea of what it looks like -- and if not just check out the screen shots. What you can't see from the still images though is just how good it looks in motion. Each character and object movement looks like it has been motion captured. The result is a little like Another World on the Amiga -- a smooth stylised rendering of the world that carries with it a strange sense of emotion.

Unlike Ace Attorney, gameplay in Ghost Trick largely occurs after a crime has been committed. Oh and after you are dead yourself too. The "trick" is that you can turn back time and manipulate the environment to cause a chain reaction of events that averts the murder, manslaughter or accidental death - and you come across all variations on this theme.

The characters and story had me glued to my DS for many hours.

It's a simple premise controlled entirely by the touch screen. What results is a rolling cycle of murders, mysteries and story all interspersed neatly with each other.

It's the story that to my mind is most interesting here. I won't rehearse what other Ghost Trick reviews have said better and more comprehensively, but the characters and story had me glued to my DS for many hours. And not being the sort of person with the time to invest in these sorts of games that is saying a lot.

Along with the story, the intelligently paced puzzles also kept me coming back for more. There is just the right level of advice -- which is slowly ramped up each time you have to restart a particular scenario.

It meant I was rarely stuck, and when I was stuck is was for the right reasons. You can always solve each conundrum with logic -- albeit the slightly circumvented logic of the game world. Without the leaps of faith that Ace Attorney plucks out of the air I was happy to invest more time into solving each ghostly intervention. This in turn made it much more satisfying when I finally did find the solution.

I've often said all this for consoles games, but rarely about a DS title. I am used to praising this sort of quality delivery and design on consoles games like Halo or Half-life. In particular the chain reaction nature of Ghost Trick's puzzles, and slightly disembodied narrator really conjure up a similar feeling to the Aperture Science labs of Portal.

The chain reaction puzzles, and slightly disembodied narrator conjure up a similar feeling to Portal.

You do need to know that there is a lot of reading to be done here, and the game places a lot of importance on understanding what is going on in the text. If you aren't prepared to don your reading specs and settle down for some verbose prose then you may find Ghost Trick a little slow going.

But even here there are some nice touches to help. For instance there is the ability to tap Up on the D-pad to review the conversation, or hold Down to fast forward conversations you've seen previously all help you on your way.

Ghost Trick arrives towards the end of the DS's life, and with the 3DS hot on its heels. By squeezing every last ounce of graphics and interaction out of Nintendo's handheld it is quite simply the pinnacle of what I have seen to date on the device. The fact that it is this game, rather than any of the 3DS launch titles, that my 3DS has been put to work on these last few weeks is perhaps the highest praise I can give.

You can support Andy by buying Ghost Trick: Phantom Detective