Other GamePeople columnists have reviewed this from their perspective - huh?:
Eclectic Gamer (DS)
Reluctant Gamer (DS) 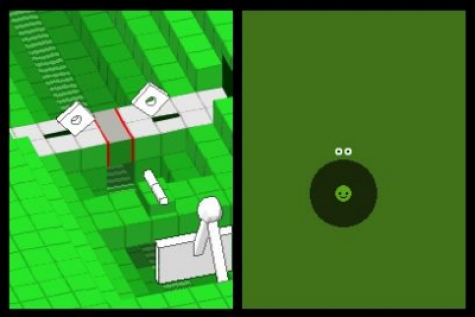 Tapping along to the beat of the music is what Rhythm Paradise is all about. The quirky minigames offered bags of ingenious variety whilst I tapped and flicked my way through the levels. But its off-beat and bizarre visuals couldn't get away from the punishing difficulty level. With no easy option I found the game becoming more and more unrewarding as I struggled to progress. Despite its charm I found my time spent tapping and scratching lead to an ultimately frustrating experience.

Rhythm Paradise is one of the oddest music games I've played. It has a very whimsical spirit to its play but the collection of mini-games meant I was quickly going from one level to another. I found myself quickly addicted to the simple pleasure of following the beat to a song and its irresistible rhythmic nature soon convinced other members of my family to have a go.

But this is where the major problem with the game reared its ugly head. It's just too hard. If you don't possess a certain level of musical talent or rhythm then the game becomes unplayable later on. Rather embarrassingly it took me over ten attempts to get past the first level whereas my younger son managed it on his second attempt. On some of the levels, failing three times thankfully gave me the option to skip past it and try something else. This is a nice touch that helped to keep my interest going but it didn't balance out the unforgiving nature of the game completely.

If you don't possess a certain level of musical talent or rhythm then the game becomes unplayable later on.

For a start, the minimum needed to pass each level is just too high. On numerous occasions I'd thought I'd done really well only for it to tell me that I'd failed. There's not even a gauge to tell me how close I was getting or letting me know what I was doing wrong. I didn't think I was that bad at tapping along to a rhythm but according to Rhythm Paradise, something in my bones just isn't right.

The deceptive visuals mask this fearsome difficulty along with the oddball encounters that entertained me while I failed. Some of them are completely bizarre and had me laughing rather than concentrating on keeping a beat. Levels where you play as a ninja dog and cut vegetables up to the rhythm of the music are some of the oddest I've seen.

Although these entertaining visuals are great for fun they don't help when trying to advance. Some of the animations were slightly off and in the end I had to close my eyes to pass a level rather than looking at the screen. Something that must have been a strange site when I took this game outside with me; leading me to conclude that this isn't the best game to play on the bus.

However, my son loved the first few levels and despite his young years I can see him getting more enjoyment out of it than me.

I also had problems with the actual use of the stylus. All the game is played on the touchscreen whether it be tapping, holding down the stylus or variations on flicking. It was this flicking that really proved trouble. There was something about this particular move which the screen had trouble registering. No matter what technique I used it never quite registered what I was trying to do. I don't think it was all down to my lack of talent.

Despite the game not having much variety to the actual stylus work it was never repetitive. This only happened if I got stuck on a certain level and although the difficulty was insanely frustrating, a few levels made up for this with their quality. One level that stands out is the Easter Island statue duet. This is down to the music, which fortunately for a rhythm game is a mix of perfect styles and genre's. I don't usually like the sugary-rich pop stuff but in this game it fits the mechanics perfectly. Bobbing my head to the infectious tunes must have appeared a pretty bizarre sight. I think my family got more out of the game by watching me than I did playing it.

After trying so hard to master the game I came away ultimately frustrated. Unlike the noice friendly Elite Beat Agents DS, its bizarre charm and excellent variety are at odds with enabling casual gamers to get in on the action. This could well be a personal issue as my talent for music is somewhat limited. However, my son loved the first few levels and despite his young years I can see him getting more enjoyment out of it than me. Playing to get a quick fix of infectious music and tapping along regardless of success seems to be the most enjoyable option. I just wish I wasn't rubbish at it.

You can support Andy by buying Rhythm Paradise