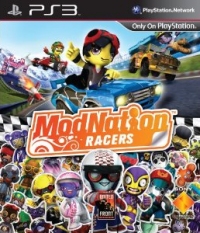 Other GamePeople columnists have reviewed this from their perspective - huh?:
Tech Gamer (PS3)
Dressup Gamer (PS3) 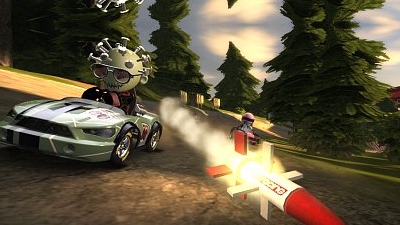 Modnation Racers PS3 reserves its creative juices to create a game that is balanced and beautiful. But it's in the character, Kart and track creation tools that it really sings. Modnation Racers is a breath of fresh air amongst Kart racers - open, fun and high def.

Modnation Racers taps into that Micro Machines', and Micro Maniacs for those who remember, joy of character based racing. Rather than looking to the grand master Mario Kart for all its game play decisions, it a refreshingly original look at what a Kart racing game can be.

At the centre of it all is a well balanced racing-battling experience. Rather than overwhelm the racer with innumerous weapons, there are just four on offer here. Sonic attacks stun other drivers, missiles do what missiles do, lightning offers a more direct attack while turbo adds some speed.

Each of these starts in similar fashion, but if you save up your tokens you can power each up. As each weapons becomes more powerful they each demand their own tactics. Speed up becomes a teleport, missiles become multiple, and lighting and sonic attacks rip up more of the track.

This simplicity keeps the focus much more on the racing then in other recent Kart racers. And the racing delivers too. The solidity you need is there in spades. Whilst there is the usual drift and turbo options, Modnation Racers still makes racing line and track knowledge important.

The visuals reminded me at times of Motorstorm in their grandeur, and of Eye Pet in their sheer cuteness.

The visuals reminded me at times of Motorstorm in their grandeur, and of Eye Pet in their sheer cuteness. And this is no window dressing as you discover when you start to customise your character, car and tracks.

Modnation Racers has some of the easiest and most endearing character creation tools I've seen on any platform. They tack the simplicity of Nintendo's Mii creation, but then give you enough to go wild with creativity.

I played through the early stages with my son (5), who took to it easily despite a lack of gesture steering. He was soon whooping at each car he passed. Adding in some other family members to bring us to a full compliment of four players was a real reminder of how good Kart racing can be.

Even my reluctant daughter was keen to create her own fantasy car and character.

Whilst Mario Kart's four player would attract the younger portion of my friends and family, and Motorstorm's four player the more hardcore players, Modnation Racers hooked us all in. Even my reluctant daughter (7) was keen to create her own fantasy car and character.

We whiled away more than a few wet spring afternoons playing and creating - and yes there is more than a knowing nod to Little Big Planet throughout. Tracks, racers and Karts were all created and raced with ease. It was quite an eye opening experience, and one that made me a little cross at the struggle we often have we these sorts of games and their half baked interfaces.

Suddenly the PS3 is looking better equipped for family gamers.

No doubt, there is going to be a lot of content created for Modnation Racers by the community - and the best of it will be highlighted in the game. But the real success for me is that this will come from a wide range of people and abilities.

With Blur taking a more locked down and hardcore route to Kart racing, Modnation Racers is the perfect partner. Suddenly the PS3 is looking better equipped for family gamers.

You can support Andy by buying Modnation Racers