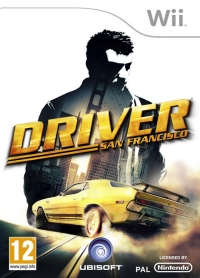 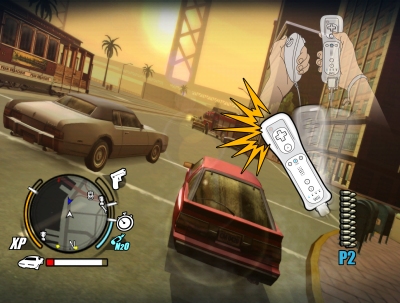 Driver San Francisco Wii offers more ways to play together than any other Wii game. Assistance, co-operative, and split-screen play are joined by novel DS integration to make this a genuinely stand out game for families.

In similar fashion to the swear-heavy 3DS version, the Driver San Francisco on the Wii may have retained the same moniker as the 360 and PS3 versions but it is its own game. We still follow protagonist John Tanner but without the car-shifting mechanic. In stead there is a fresh prequel story on the Wii about Tanner's first undercover mission.

Things start with Tanner's partner being murdered in a drive-by shooting by an expanding criminal gang. Tanner then teams with the more experienced Tobias Jones as he looks to set right the wrong of this untimely death.

The basic gameplay missions and look and feel of San Francisco are pretty much the same as the bigger consoles. The Wii does a remarkable job of rendering the city and keeping things running smooth and steady. Controls are, as you would expect, tailored to the Wii-mote and Nun-chuck. But unlike previous Driver games on the Wii you can't drive and shoot at the same time, which is a real shame (although compensated with a co-operative mode I'll get to in a minute). There is also the odd decision to have to waggle to boost. Apart from this though the controls are responsive and functional.

Although the game starts very easy, it soon gets difficult. The main challenge here is in the increasing aggression of the other gangs and police as they chase you down the streets of San Fran. You are charged with losing them, which sounds easy but is much more of a grind than simply ducking into an opportune alley.

Because of this, families may want to play this game together for extra help in some of the harder sections. This is where the controls take a turn for the better with a two player co-operative mode that enables a second player to take responsibility for shooting with a second Wii-mote.

Playing this way is actually one of the most involved family games I've played on the Wii.

This not only makes the missions a little easier but also enables a less proficient player to come along for the ride, quite literally, without the need to worry about driving. Alternatively it means a parent can assist while their teenager works through the missions in control of the car.

The real novelty is the Wii game's use of the DS. It's a little like Batman Brave and Bold (Wii) that used the related DS title to enable players to control a third character, but here you don't need a DS cartridge to play it. You can download the game from the Wii to the DS so that a second (or third) player can use the handheld to check the map and place roadblocks to surprising pursuers.

Playing this way is actually one of the most involved family games I've played on the Wii. With my oldest in control of the car, me taking charge of the shooting using a second Wii-mote and my younger son checking the map on his DS it felt like the whole family was involved in the cleanup of San Francisco. You do have to bear in mind that this is a PEGI 12 game (not quite as blue, or aggressive as the 3DS version which is a PEGI 16), but by turning the sound down we avoided most of the bad language.

For families this means you can really pick the version that suits your makeup.

This is rounded off on the Wii by a two player co-operative story mode where you play in split screen, and a four-player split screen party mode. These combine with the single player campaign to offer a very comprehensive set of ways to play.

These options speak to the fact that there has been a lot of effort spent on Driver San Francisco. This, along with the original (admittedly slightly less fleshed out) 3DS version and the impressive Driver San Francisco (360) to make this one of the most comprehensive (and well tailored) cross platform releases I've seen in recent years.

For families this means you can really pick the version that suits your needs. Older, core gamers should go for the 360/PS3 game with the in depth story and novel car-shifting. Teens, who are old enough, can enjoy the portable cartoon stylings of the 3DS games. Younger families can play this inclusive Wii version.

You can support Andy by buying Driver San Francisco