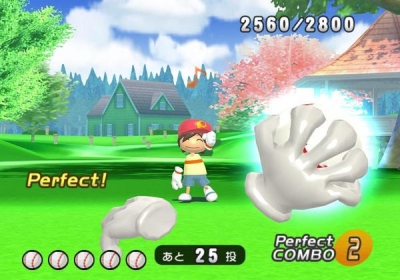 Let's Catch is a Nintendo Wii-Ware gem that wouldn't work on any other console. But more than the intuitive controls and amiable game play it's the hard hitting dialogue that surprises here.

On this basis, Let's Catch re-creates a simple game of catch using the motion and buttons of the Wii-mote. It's a simple and direct experience. Although it may sounds like this is too simple to sustain a game, Let's Catch succeeds by the depth of the controls.

As you play layers of nuance slowly peal away and you realise there is a lot more going on here than first met the eye. At first players just swing the Wii-mote any which way, and get reasonable results. But then as the game requires you hit bigger scores, they realise that there is a big difference to throwing the perfect ball and throwing a clanger.

This is a mechanic, like Boom Blox, that simply wouldn't work on another platform.

The orientation and gesture-arc all contribute to consistently getting high scoring throws. The catching is also slowly learnt as you play. At first players are happy to achieve a good catch. But soon they look to chain together a series of perfect's for score multipliers. Then there are the UFO's that need a powered up (perfect-catch) ball to dispatch. This is a mechanic, like Boom Blox, that simply wouldn't work on another platform.

Around the strong throwing is build a whole series of games. There are multiplayer challenges that involved exploding balls, hitting targets as well as timed and score challenges. But what really stands out is the single player story mode.

The story mode puts you with a series of characters in the park to achieve a certain score before proceeding. But what's unexpected here is the dialog, and the topics that addresses. As you play your opposite number chats about themselves in an off hand well written manner. At first it doesn't really register, but soon you realise these characters are really opening up to you.

There is the young boy you meet first, who talks about his Dad who has to work away. How he misses him, but when he comes home his parents argue. And, here's the heartbreaker, he hope's it's not his fault.

Let's Catch is as intriguing as it is fun to play.

Then there's the lonely park attendant, and the Dad who is worried about his daughter's charge of character after starting school. And there's various lonely individuals just looking for some companionship in their life.

This takes a really simple game and moves it from a rhythm action genre towards more of an adventure. After playing a little with my kids over the weekend, I came back in the evening to play for another hour or so to find our more of these beguiling stories.

Let's Catch brings all this in one easy and cheap to obtain package. It made me wonder if Let's Tap could have sold in a similar manner. Either way, Let's Catch is as intriguing as it is fun to play. Kids as young as three can play it, yet there is enough in it to get Mums and Dads playing on after the little ones are in bed.