Other GamePeople columnists have reviewed this from their perspective - huh?:
Audio Gamer (Wii) 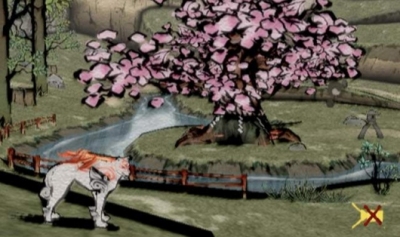 I literally gave up on this game after 30 minutes on the PS2. I intended to return and give it a proper chance, but that half hour unskippable introduction simply set the bar too high. For me then the killer addition in the Wii version is not gestures or waggle, but the simple ability to skip the cut scenes.

As any good reader of Wikipedia will know, Okami is a pun that means both 'great god' and 'wolf'. It is a game whose visual style, more than anything else, claimed its place in the annuals of video gaming history. By nature it is a pretty straight forward action-adventure in the Zelda mould - open world, set piece dungeons with plenty of loot and equipment along the way. The game feels as if it is trying to escape this prescribed experience and does provide a variety of innovative ideas, but the bottom line here is that this is essentially a great looking competently delivered Zelda experience. A point that director Hideki Kamiya is not shy about being a self-proclaimed Zelda-fan.

The game's cult status, following its release on the Playstation 2 back in 2006, was further cemented by the recent closure of its developer Clover Studios. Adding intrigue to injury is a story about the strange appearance of a stray watermark from a leading videogame website on the cover of the Wii version. Were the box layout designers really too pushed for time that they just used google images to grab some artwork for the cover?

Okami presents its player with a living hand painted world. As you might expect, these are not the bright hues and explosions of the western pallet. Rather, we have here the subtle tones and large sweeping distinctive strokes of Japanese sumi-e-inspired art. Another nod towards Zelda's cell shaded Wind Waker - but here the cel-shading delivers a hand made aesthetic that really does feel like you are running around in a Japanese wall hanging.

Okami presents its player with a living hand painted world.

What at first appears to be a bit of a gimmick soon becomes subtle and multi-layered. The environments have had the sort of attention to detail that developers used to lavish on pixel penned creations back in the days of 16bit gaming. It simply feels authentic, from the movement in the trees to the puff of leaves when you land after a jump. Not only this, but this art-style extends into both the game's broad brush structure and brush based control scheme.

The play mechanic itself, although drawing as we have said from Link's backpack, does have some interesting new additions. In particular is the celestial brush. This aspect of game connects the player to the art style by allowing them to pause the action (sepia style) than then go wild with a calligraphy brush, creating all kinds of shapes and symbols. As the game progresses you learn more of these gestures that enable you to interact with the environment in novel ways. Not having actually made it to the PS2 gameplay proper, I can't say first hand, but this brush technique must have been slightly unwieldy being mapped to a single analogue stick - and certainly makes more than enough sense of porting it to the Wii.

The game continues along the familiar action adventure lines mapped out many years previously by that young green hooded adventurer. But rather than being a simple Zelda knock off, Okami somehow revels in its similarities. The gameplay suitably mirrors the art style of the game and proceeds in broad strokes. Before long the map open ups and provides various tangential tasks should you have time to pursuit them. But, happily for those of us with families and mortgages, the main route through the experience is penned in bold. The game then becomes a wonderfully directed experience punctuated by those familiar dungeon challenges.

this is a game that impresses by its commitment to a solitary idea - a playable Japanese painting.

We could at this stage plunge into the minutiae of the game, extolling the detailed plot, well localised writing, framerate and widescreen options. We could give detailed accounts of each level, and plot twist. But to do this would be a disservice to a game that should be experienced first hand. We leave these things for you to discover yourself (or if you can't waste read in a thousand other reviews).

So as we leave you it suffices to say that this is a game that impresses by its commitment to a solitary idea - a playable Japanese painting. The coherence of experience that results is testament not only to this vision but to the ability of the development team who were able to deliver so convincingly on every front.

That this is a beautiful game there is no doubt. What I hadn't expected however was top find such a robust and enjoyable experience underneath the gloss. Not only that, but it is an experience that really fits (and at times almost eclipses) the much talked about art style. Okami is a rare gem of a game that should be enjoyed for many years to come. It's presence on the Wii then is great news for gaming in general not to mention for a few Wii owners. And as I said at the top of the piece, being able to skip the cut scenes certainly helped me get into the action and discover for myself how good it is.

You can support Andy by buying Okami