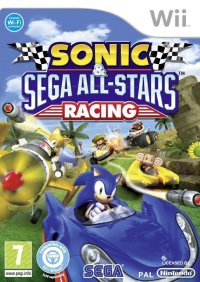 Other GamePeople columnists have reviewed this from their perspective - huh?:
Frugal Gamer (Wii)
Family Gamer (360) 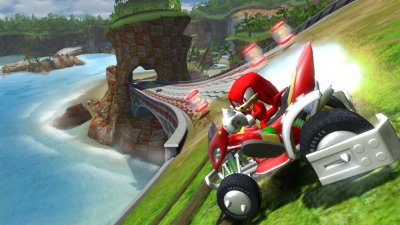 Wrestles its way into our hearts alongside Mario Kart and My Sims Racing. Mirroring Sega's focus on action rather than exploration, this may lack the detail of Mario Kart but it succeeds by keeping the focus on the racing.

Sonic and Sega All-Stars Racing adopts the usual kart racing memes on the Wii. There are a set of varying drivers and vehicles that compete around a set of equally varied tracks. It's fast and frantic racing fun, rather than anything more serious. Players of all abilities can compete in a game setup to encourage competition and help back markers catch up with the peloton.

This is Mario Kart from Sega's parallel universe. The rock-paper-stone approach to weapons, the speed reward for power sliding round corners, and the red/green shell, mushroom, rocket equivalent weapons have all been lifted from Nintendo's tour de force.

But Sumo Digital, who similarly aped Mario Tennis with their Sega Superstars Tennis, knows what they can bring to the party - a bucket load of Sega history. Characters as diverse as Sonic, AiAi from Super Monkey Ball, Amigo from Samba de Amigo, Zobio from The House of the Dead to Alex Kidd from Miracle World all take to the track in appropriately themed vehicles.

Sumo Digital remain true to fast and frantic ethos of Sega - as opposed to the explorative and precise approach of Nintendo.

As well as these characters, they also remain true to fast and frantic ethos of Sega - as opposed to the explorative and precise approach of Nintendo. There is more going on at any one time in Sonic and Sega All-Stars Racing than we are used to in Mario Kart. So much so that Nintendo's kart racer feels almost sedate when we revisit it for comparison. But also, erring towards this frantic pace means there is less to do in each circuit - whereas Mario Kart is famed for shortcuts and hard won secrets.

Sega have a few ideas of their own to add though. Each character has a special All-Star move that can be triggered when you fall too far behind. There are also three types of vehicle to choose from - cars, bikes and hovercraft - each of which not only handle differently but are also suited for certain surfaces. There is also, a surprisingly helpful audio commentary from an enthusiastic compare.

This all adds up to an experience that is brash, loud and riotous - just as we would hope for a Sega title. But threading through the fan service, and Mario Kart similarities is an accomplished racing game. Sumo Digital manages to rein in the chaos enough to deliver a solid racing experience. Handling is solid and suits both Wii-mote steering wheel for newcomers, as well as more accurate Classic controller and Nun-chuck for experts. The only scheme lacking in comparison to Mario Kart is the lack of GameCube controller support.

We also appreciated being able to race with your Mii from the off, rather than having to unlock the feature as in Mario Kart.

The icing on the cake, that keeps the scales tipped towards skill rather than chance, is the lack of a lead killing blue shell equivalent. This, combined with other race oriented decisions should convince even hardcore Mario fans of the credentials on offer here.

This is pretty everyday fare on the Wii, accordingly it is easy to criticise where Sonic and Sega All-Stars Racing falls short. But even the slightly bland levels and choppy frame rate don't overly detract from the solid racing experience. That this is the same game as on the 360 and PS3 is impressive enough, but add to that the same online and multiplayer made and you have a package that offers a lot of value. We also appreciated being able to race with your Mii from the off, rather than having to unlock the feature as in Mario Kart.

While Sega Superstars Tennis tried to create a cross platform Mario Tennis and Wii-Sports, so too Sonic and Sega All-Stars Racing crowbar the kart racing genre away from Wii owners and offer it to 360 and PS3 owners too. This is great for the other consoles, but on the Wii the cross-platform nature of the development seems to dampen what could have been a real Mario beater. Even so, there is plenty of fun here, and many a parent will give a sigh of relief at being able to something other than Mario Kart - for a while at least.