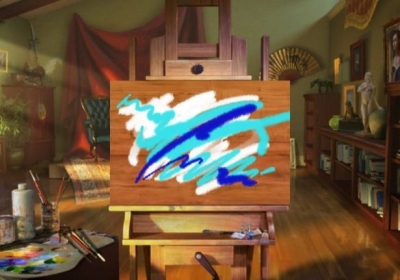 uDraw Tablet brings the DS's tactile interface to the Wii. A clutch of initial games prove the concept, but the real test is how well the peripheral will be supported with more creative uses.

Simple peripherals can make a big difference to how we interact with games. The Wii revolutionised gaming by offering an unusual way to play a game. The simple TV remote controller used existing technology to create a genuinely new experience.

Since then all manner of add-ons have been selling impressively. Nintendo themselves, keen to capitalise on their success, have released a Steering wheel for Mario Kart (Wii), the Balance Board for Wii-Fit (Wii) and of course the MotionPlus block for the unrivaled Wii-Sports Resort (Wii).

These are mirrored by third party peripherals that range from simple Wii-mote extensions that give the feel of a bat or racket to more fundamental add-ons like the Chicken Stick that change how the controller is used or even replacement controllers that are replicas of real life Tennis rackets or Table Tennis bats.

Many of these look ridiculous, but use them in a family and it's quickly obvious how much fun can be had from simply changing what we use to control our games.

The uDraw Tablet creates another new way to interact with a videogame. Like the Wii-mote it isn't the technology that is ground breaking, but its application as a plaything. uDraw provides an electronic pen and pad that is used to control where you are pointing on screen.

This doesn't sounds all that unusual until you see it in the hands of a player - and in my case a six year old family gamer. Unlike light guns, a computer mouse, or Wii-mote pointing you don't have to transition from one spot to the next, you simply take your pen of the tablet and place it down where you need it next. You have the sort of instant control that made the DS touch screen such a success for all manner of games.

The uDraw tablet instantly removes any vagueness with its tactile interaction.

Once they had plugged in the Wii-mote and popped it into the dock my kids took to the drawing mechanic straight away. They have always struggled with the accuracy demanded by Wii-mote and light-gun pointing, often getting frustrated as they try and even get the pointer on the screen. The uDraw tablet instantly removes any vagueness with its tactile interaction.

My youngest (3) still found things a little tricky. In particular, the pen has a button on it to access the menus which he kept pressing by mistake. He could see what he wanted to do, but the controller seemed to be stopping him. His solution was to throw the unit across the room and be done with it. Not ideal, but certainly a test for its build quality - which it passed with flying colours. I'm not sure why but it has that sturdy Speak and Spell feel to it, not just because it's a similar size but also it feels similarly solid. 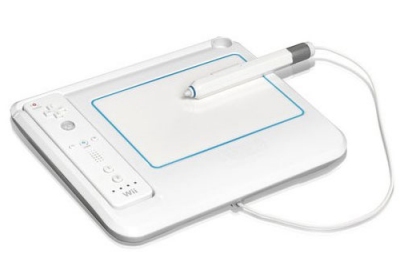 The tablet comes with uDraw Studio in the box. This is a simple drawing tool that offers a range of pens, brushes, pencils and crayons as well as different types of paper to draw on. It works well and gives a good sense of what the tablet is capable of.

The pen itself is pressure sensitive so you can apply a light or dark line to your creation. This pressure point feature is also used to select items from the tool box, but here it is a little less successful as it doesn't trigger until you release the pen. Both me and the kids ended up using the button on the shaft of the pen as an alternate way to make selections.

uDraw Studio also provides some pictures that can be coloured in, either by flood filling the areas in a particular colour or simply shading the outlines in with a brush or pencil. It all worked well, but without really shining.

There is something captivating about the direct control the uDraw Tablet offers, but at the same time the software let it down a little. Menus and selections just felt a little awkward and meant you had to keep popping up different screens.

There is something captivating about the direct control the uDraw Tablet offers.

You can export pictures you have created to an SD card, as well as watch a replay of how you created your masterpiece. This play back feature had our kids in hysterics as they watch the screen magically and haphazardly fill with their drawings.

I was a little surprised that saved pictures were only around 500px wide, but I guess this reflects the Wii's standard definition output. Worse though was that each picture has a big uDraw water mark in the bottom corner. This seemed a little cheeky to have my offspring's masterpieces branded so blatantly. 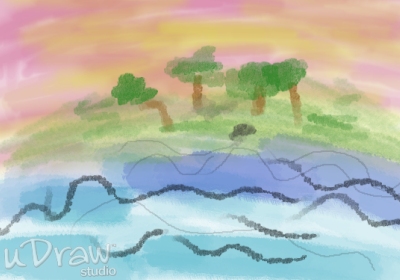 More promising though is the use of the tablet for proper games. Like first party Wii peripherals, this is being pushed as a new gaming platform that can be used by a whole range of games in the future. The first two we will see are Dood's Big Adventure and Pictionary.

The big question here is whether the investment (around Ł50) will be matched with enough games.

Pictionary is as you would expect, and follows Pictionary (DS) in mirroring the popular board game with some electronic enhancements. More unusual though is Dood's Big Adventure which offers a combination of a light-gun and platform adventure game. Players use the pen to attack enemies and interact with the environment. This is really good for younger players who struggle with the Wii-mote pointing. The uDraw Tablet offers more direct control so you can pinpoint the enemies you want to attack.

As with any new peripheral, the big question here is whether the investment (around Ł50) will be matched with enough games that use the tablet in the long term. The first clutch of games offer a good variety of implementations, but you really need to click with one or other of these to make the purchase worthwhile in the short term.

You can support Andy by buying uDraw Tablet and uDraw Studio