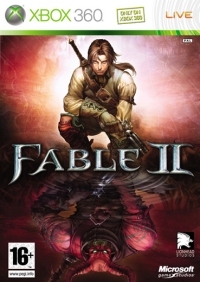 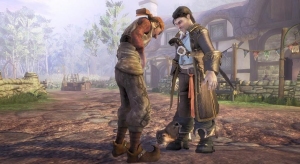 Fable on the original Xbox was an ambitious adventure where player's choices were visibly reflected in the protagonist and their abilities.

Fable 2 on 360 looks to capitalise on the promise from the original game, and deliver a fuller experience. Impressively, it succeeds in providing a fleshed out adventure to the original's rough sketch.

Action adventure games are enjoyed for two reasons. They provide a variety of fast action encounters where you are fighting, fleeing or evading some enemy. They also provide a large world in which to explore and adventure. This exploration is usually driven by some particular plot-tension introduced early in the game that you must resolve.

As you adventure through the world, you encounter the action sequences through encounters with enemies and general hazards. Success in these encounters opens up more of the world to explore and provide new equipment.

Although other adventure games often allow the player to pick and choose their way through the experience, choosing how to develop their character, Fable 2 is the only game to take seriously each and every decision the player makes. Seemingly innocent choices (about who to help or hinder for example) result in a widely varying character (and adventure) in Fable. This is tangibly seen by both the appearance of, and reaction to, the player as they make their way through the world. Influence gained from being scary or personable can be used to get what they want.

Fable 2 creates a world of characters within which the player can interact. They choose whether to win them over by friendship, persuasion, threat or fear. This starts off as something of a novel distraction, but as time goes by it soon becomes a central tenet of progress in the world. Often in Fable (as in real life) the important thing is who you know, rather than what you know.

Some players will choose to try and do 'the right' thing throughout the game, whilst others will enjoy playing the villain. Each choice has a consequence, and both paths often turn out to be more complex and problematic than first appears.

These character interactions and the connection made between actions and consequences results in a genuinely persistent world in which to play. Players soon get to know and invest in the other people they meet. Add to this is some excellent Tolkien-esque story telling (and the necessary voice work) and you have an experience of considerable weight and meaning.

Players are drawn to fable because of the tangible cause and effect of its world. Presented with a simple choice, players will deliberate over which the right path may be. From the off, should they allow the town drunk to have back his booze? Will this lead to his downfall? But then, maybe a friendly drunk is just what they will need later on. Weave these moral choices in amongst the excellent single button combat and beautiful cut scenes and only the most stone hearted of gamers will be able to resist.

Adventure games are notoriously heavy on the time required to play them. But, like reading a good book, once you are hooked into the story this is not a problem - in fact quite the reverse. Happily then, Fable 2 manages to grab the player's attention from the off and keep them playing for long sessions of two hours or more. Although it is possible to dip in and out as time permits, to get the most out of the story (again like reading a novel) you really need to set aside a whole evening.

Fable 2's 15 rating reflects its grown up approach to story telling and themes that young players may find unsettling. The game hinges around real time combat that is by nature violent. It also includes adults abusing their power over children, and the implications therein. While these are likely to be negative for youngsters, those a little older (particularly if they can play with a parent) will find an engaging experience that raises many interesting questions.

Intermediate players are very well catered for here. The game leads them into the action smoothly and without the need for stop start tutorials. Narratively, the game plays more like a fantasy novel, with writing that is easily grown up enough to appeal to the wider casual audience. The developers state that this is a game that on many levels has been designed for people who don't usually play games - and to a large extent they deliver on this promise. It is probably the fantasy genre (with its other worldly setting and violent battles) rather than the game itself that may put off those less used to this sort of experience.

Expert players have long espoused the virtues of the original Fable and looked forward to this sequel. Happily they will not be disappointed. There is plenty to keep them engaged throughout with enough tangents to extend the experience for more committed gamers. The cause and effect element of the game also means that these more adroit players will want to play through a few times pursuiting different ethical paths.

You can support Andy by buying Fable 2