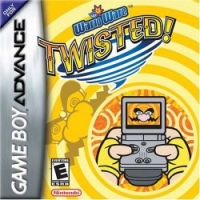 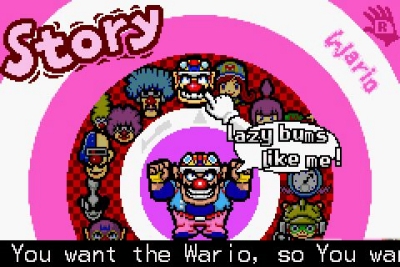 Nintendo's follow up to the massively successful WarioWare: Mega Microgames on Gameboy Advance introduced another of their growing interests: motion controls. WarioWare: Twisted combines the riddle based mini-games, wonderful left/right motion controls and vibration feedback to deliver an experience that genuinely builds on their previous successes.

Party games have existed since video games first began. They are typified by their short duration and simple tasks. More recently, the entertainment of mini-game based releases has focused on variety, novelty and quantity of experiences on offer in a single package.

As with other WarioWare games, on the GBA, DS, Gamecube, Wii, WarioWare: Twisted provides a simplified mini-game format. Each level presents a simple task with a one word introductory clue. For example, the word 'shave' precedes a round that presents the player with a bearded man and a shaver. The player must sufficiently tilt the game to move the shaver over his whole face.

The difficulty is in the limited amount of time to make the connection between the textual clue and real life scenario. They are the sorts of puzzles that are, like the popular TV show Catch Phrase, simple once you know the answer. Each of the activities are fired at the player in quick succession, stretching both the brain power and dexterity.

Add to this some finely honed tilt sensitive controls, complete with vibration feedback, and this is a game that really packs a lot of new ideas for the genre.

Although the concept is a little odd at first, give the game some time and it starts to really shine. The obtuse clues and nuanced connections force you to access an instinctive part of your brain. The added physicality and simplicity of its tilt controls (and vibration feedback) give the game an almost magical quality. It is an experience that, in its day, was not to be repeated until playing Wii-Sports a good few years later.

Although this is a mini-game experience, WarioWare levels tie together a string of themed games and take a good five to ten minutes each. It is worth setting aside a good half hour to play this game. WarioWare not only has plenty of replay value, but should last a good fifteen hours on a first run through.

The wacky random subject matter draws from most parts of daily life. Because of this players will come across scenes that are either unfamiliar to them or involve some cartoon style violence - hammering, shooting and the like.

Both novice and experience players should be able to enjoy WarioWare: Twisted. Those with a longer video gaming history will benefit from the historic gaming references in many of the mini-games, as well as the ability to repeat play their favourite games for higher scores.

Although the quick fire levels and super simple controls suit younger player's shorter attention spans, their restricted time and the one word introductory clues means that the very young may struggle. My five year old for example was foxed by the limited time and the sheer variety of tasks. However, when I selected a single repeatable mini-game she enjoyed improving her score with this more restricted selection.

You can support Andy by buying WarioWare: Twisted