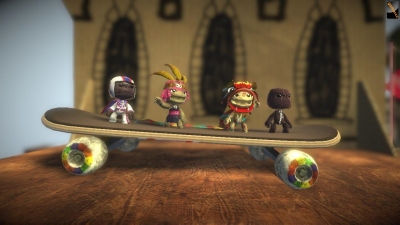 Little Big Planet's central platform experience, is in fact a gate way into a world where you can create you own video games. Using the simply, playful Sackboy character - and given enough commitment and time - players can create, play and share their own creations with an online community.

Platform games task you with getting from point A to point B. The world you journey through is usually based on different levels, and populated with enemies, switches and lifts to be negotiated. As you work through each level you pick up various collectibles that accrue score, special abilities and access to hidden areas.

Although first appearances suggest Little Big Planet is a simple (incredibly attractive) platform game there is a lot more to it that . Although hard to understand at first (both in concept and practice), players can not only play the game in the box, but design and share their own creations.

We don't often talk about graphics, but here it is unavoidable. The whole world is created out of what looks like recycled materials - cardboard, egg boxes old stickers and the like. Your character, Sackboy, starts off a bit like a teddy bear but us soon adorned with all manner of clothing, accessories and gadgets.

As well as playing dressup, you can also control Sackboy's emotions with the controller - D-pad applies his mood while holding a trigger enables you to control his arms and finally his gaze is picked up from the controller's tilt. It sounds complicated, but in practice is a simple system that picks up the player's character remarkably well. Much to the enjoyment of my family.

As you play through the game you earn materials, gadgets, stickers and the like. These can be used in the create mode. Up to four players can create video games together. These can be as simple or as complex as you like.

Being a platform game, both the main game and the games you created are limited to the usual jumping, running and button pressing antics. This is not a problem for the game included in the box, but can feel limiting for those wanting to create a game of their own. Little Big Planet 2 promises to offer a creator array of game play options - racing, shooting and puzzles games already being mentioned.

Some may also find that the main Sackboy character is a bit floaty for their liking - he falls much more towards Luigi than Mario, and is certainly slower than Sonic. Although once you are accustomed to his physics this is rarely a problem, those creating games are also such with this floaty feel. Again, this is something that is promised to be addressed in Little Big Planet 2.

Players come to LittleBigPlanet for its sheer sense of wonder and fun. I sat down in front of it for the first time with my wife - she was instantly hooked by both the puppet-y visuals and Stephen Fry's masterly narration. Before we even knew what we were doing, we were both egging each other over obstacles and dressing up our little cloth folk.

At one point we stopped mid-stage to have a look at he items collected in our Pop-it menu (read: kit bag), before we realised it a good twenty minutes had passed as we played dress up with each other - each creating unique and never before seen characters.

The platform game conforms to usual game timings. You should be able to get through a level in around five minutes, and may want to string a few together to get into your stride.

The dress-up features, as I mentioned above, seem to gobble up more time. The sheer number of options available means there is always one more combination to try.

The game creation mode is time consuming. Although every effort has been made to keep things simple, you are grappling with the sorts of tools developers use for creating games. This will either thrill or terrify you - depending on how technical you are and how much time you have. Those that relish the opportunity and lavish time and effort on their creations can achieve some remarkable game play - and if shared to the community can become famous, or maybe even head hunted for a real game design job.

Very young players will appreciate the simple controls and the dressing up. They can also be cajoled in the right direction by other players. In fact the collaboration between players of different abilities and ages is one of LittleBigPlanet's best assets.

Intermediate players will get most out of the main platform game - which offers both creative and challenging experiences to players of all abilities.

Experts are most likely to be drawn towards the create and share aspects of the game. LittleBigPlanet will no doubt see the rising of a number of new game development stars - and anyone with sufficient patience and time (and that little thing called talent) has a shot at creating something pretty special.

You can support Andy by buying Little Big Planet