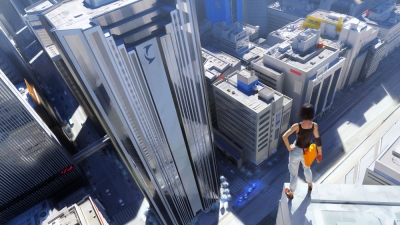 Touted to be putting the person back in the first person shooter genre, Mirror's Edge does just that. What results is an almost ethereal experience of running, leaping, sliding and ultimately flowing through a pristine cityscape. Although guns are involved this is as much an adventure as it is a shooter.

Adventure games are enjoyed for two reasons: they provide enemy encounters that require tactics and strategy to conquor, and they create a fantasy world in which to explore and adventure.

Mirror's Edge is unique because the player uses the city environment as a gymnasium to get around. Similar to the free running inspired Assassin's Creed 360, the protagonist is equipped with a few basic ways of interacting with buildings (jumping on/off, sliding, rolling and wall running) and it is then left up to tem to find the most efficient route away from their pursuers.

The game adds to the sense of connection to the environment by showing the arms, legs and torso of the player in shot. Although player from the first person perspective, the player is very much aware of the body they are controlling. This combines with some suitable audio lunges, exhales, gasps and breathing to give the experience an almost claustrophobic appeal.

This is set against the wide open city vistas that extend as far as the eye can see. While the city is largley rendered in grey and white, suitable routes through are highlighted to the player by a red sheen that appears when they are approached. Red roofs, plans, drainpipes and ladders all signify 'follow me'.

The game story unfolds through interstitial comic rendered cut scenes that play well against the high definition look of the main game. These invariably lead to a particular object in the next level - the player needing to get to (or away from) a particular location or person.

Players will be attracted to the game because of its new approach to the genre. Everything from the iPod-clean aesthetic to the emo leading character to the whole way the game works screams innovation.

Once this novelty wears off there is a knife edge adventure game beating beneath. Barging through a door with the blue (read: police) close behind, only to be confronted with a sheer drop and a maze of column ledges is a heart stopping moment. Starting to navigate through the space whilst laser sights strafe the air is enough to get anyone's adrenalin pumping. Then a simple miss timed jump and a last minute grab leave you dangling over the precipice.

By the time you make it through you may well find you have even broken a slight sweat.

As with other adventures, you really need to give Mirror's Edge some time to get going. Both the unusual controls (revolving around limps and movement rather than guns and ammunition), and the new camera perspective need acclimatising to.

Even once this is all familiar to you, sessions should be expected to extend into a couple of hours if you hope to avoid quitting and loosing partial progress.

Young and novice players may find it a street to get their head around the new controls and perspective. Even those that do, need to consider the violent full contact nature of the game, and the abduction and murder themes that unfold.

Intermediates, given a little time, should find the controls and outlook of the game refreshing. There is a lot to take in to begin with, but as this becomes second nature the meat of the game's adventure can be grappled with.

Experts are clearly the target audience here. They will fully appreciate how long it has been since this sort of innovation has been seen in the first person perspective. Combine this with its adventure/shooter combined play style and there won't be many experts who wouldn't enjoy the experience.

You can support Andy by buying Mirror's Edge