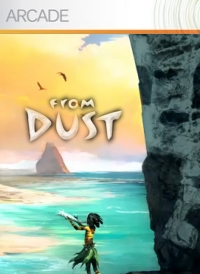 Other GamePeople columnists have reviewed this from their perspective - huh?:
Reporting Gamer (360)
Novel Gamer (360) 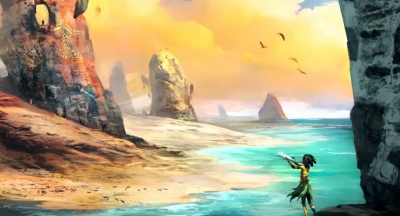 From Dust offered not only a god-powered microcosm, but one that echoed an unknown world of nurture and parenting.

I have never wanted to be a shimmery, dusty, omnipotent, and ever nurturing spirit snake until now. My deformed and miniature humanoid babies seem to like me.

I also never thought I'd be able to see my birth through the power of song and dance but From Dust, the new XBLA game, created this unique miniature view of reality. Being born myself into the game, I was forcibly advised to defend my tribe from the deadly elements of the outside world they find themselves in. Not an easy task for a new parent.

Luckily, unlike most children, my siblings seemed to listen to all the orders I gave them. Telling them to walk over there, pick up the stone, worship the sacred icon, and make sure you stay away from that volcano.

I quickly learnt things I wasn't expecting whilst parenting these children. Not only did I acquire the knowledge of how sedimentary rock is formed, and how the changing of tide gathers and removes soil in this thing called erosion, but I also learnt the power to make jelly water, to deter tsunamis and how to make the sun burn brighter and evaporate all moisture on the surrounding land.

However, it seems that the world I had been sent to defend doesn't make parenting easy. Fortunately, there was a timer for every natural disaster, and a way of preparing for each encounter with nature. I dropped the ball on a few occasions and had to suffer the unsettling sounds of my children screaming and gargling in the salty water of the relentless ocean.

Being a parent of some immature, short, weird-faced people was very tricky at times. I had to carry thousands of tonnes of earth at one point to try and redirect a leaky volcano away from their villages.

I often took to sitting back and watching the vegetation grow.

It was very satisfying though, I often took to sitting back and watching the vegetation grow after the hard work was completed. And it does grow, like an unmaintained weed - the plant life spreads like wildfire which then attracts leviathans who seem small and strangely cute to you, but almost definitely huge and terrifying to your children.

And speaking of wildfire, plant life and lava is not a very good combination for you, or your children. If like me you were just enjoying the view when one of the kids fell off the swing, in this ongoing microcosm, then you will know the guilt that follows and no amount of apologies, spiritual offerings, or level progression will remove that underlying hatred, as your children grow into their teenage years.

I'm sure other people are better parents than me.

Thankfully, as your tribal offspring mature, so do the plants, and your almighty powers! The plant life evolve and brings new threats of forest fires, but also their answer in the shape of watery plants to put them out.

The thrill of world sculpting combined with the loving admiration, and sometimes hatred, of your danger seeking ugly-cute brood make the experience more rounded. Though I'm sure other people are better parents than me, they probably don't often have to contend with tsunamis, volcanoes, and forest fires every five minutes or so.


You can support Amber by buying From Dust

"Games provide me with a diverse range of miniature worlds to explore. I'm fascinated by the myriad of ways these microcosms recreate elements of reality. Even the most fantastical or abstract games stem from real world concepts when studied under the scope. Far from being mindless escapism, playing games prompts me to reflect on the concepts presented and how they inform my outlook."