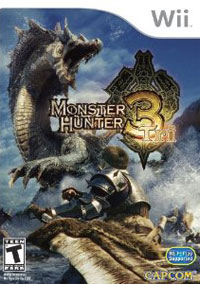 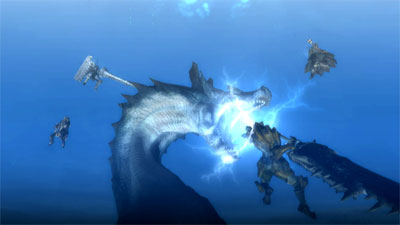 Monster Hunter Tri commits multiplayer hari-kari, but somehow forges a game that is enjoyable to sink long hours into. Although Wii-Speak foibles mean you will probably play alone, there is still an awful lot of fun to be had.

I'm a huge fan of any kind of co-operative multiplayer; I will generally buy anything if it gives me the chance to co-op with a friend, either locally or via the Internet. Monster Hunter Tri promised quite a lot in this area. I'd heard that the multiplayer aspect of the game was designed around groups of players taking on challenges that were beyond the capability of a single player and best achieved through coordinated team tactics. If that is the case then I think those elements must still be a long away ahead of me in the game.

The co-op quests I undertook with a friend were really just a mirror of the kinds of quests you can do on your own. We did have a good time playing together - other than the technical problems I'll come to in a moment - but I was never able to shake the feeling that I was just playing the single player with other people along for the ride.

Some of the multiplayer quests are artificially expanded. For example, one quest requires the gathering of 15 particular items. An individual player is only able to hold 10 of these at a time, so either a second player is required or the lone player must make two trips to the 'goal' chest. However, while the multiplayer game-play is not dissimilar to single player, it is enjoyable to have company along for the ride.

My friend and I play co-op games quite regularly - Endless Ocean 2 (Wii) and Uncharted 2 (PS3) being particular favourites. The things we found most frustrating about Monster Hunter were of a technical nature. It has grown from being Monster Hunter (PSP), designed around 4 players physically gathering together, to a Wii game that is played in an ad-hoc Wi-Fi multiplayer style.

With this communal nature of earlier generations of the game did not need remote in-game chat. Sadly the biggest failure of the Wii iteration of this game is that, for a game designed around teamwork and co-operation, the communication options for players are among the worst of their kind and demonstrate a real lack of experience in the area.

I was never able to shake the feeling that I was just playing the single player with other people along for the ride.

Perhaps this isn't the place to vent my long-standing feelings against Wii-Speak - truly the worst voice chat in gaming history - but Monster Hunter Tri makes it even worse. Neither of us could figure out why we couldn't hear each other talk, even though the game indicated the Wii Speak was active. A quick search of the Internet later and it turns out that we needed to actually friend each other in-game. We're already friends via Wii and via the Wii Speak software. An additional layer seems unnecessary. It also means that if I want to speak to other players I have to send them a friend request first and vice versa.

Of course when you do get the Wii-Speak working it is crackly, low-fi, suffers from echo and generally fails to work at key moments. We've used it with some success with Endless Ocean, but the calm and quiet environment of that game is a very different experience.

This is all compounded by the problem that the menus and typing options for communication without voice are also very poor. Finding messages and sending/responding to friend requests is fiddly. Unless you have a Wii keyboard (has anyone actually seen one of these?) you have to try and type using an onscreen letter pad which defies conventional keyboard layout and seems to have learned little from PSN's own excellent text chat functions.

Additionally, the networked game is not without its bugs. My friend kept getting connection failures trying to come to the server I was on. After some experimentation, she managed to join a different server to which I could then switch. It seemed fine for a while, but 30 seconds before the end of a mission she was randomly disconnected and missed out on the rewards.

I actually found myself liking Monster Hunter Tri, in spite of its many faults.

The core game itself is enjoyable, although not the revelation I had hoped for. I had hoped it would be a single and multi-player Shadow of the Colossus (PS2), but the Monster Hunting in this game is much more simplified. It's a hack and slash approach; a matter of attacking with bespoke weapons and adapting armour to be able to resist more and more damage as the character progresses.

I know it doesn't sound like it, but I actually found myself liking Monster Hunter Tri, in spite of its many faults. I like that it has eschewed the meaningless level-up mechanic of other role-play games in favour of a weapon and armour crafting system which allows the player to progress in a more logical fashion. Access to better items allows success against bigger foes that release items needed for the next tier of equipment - it makes the feeling of character development quite organic and natural.

I felt a bit bewildered by the sheer number of sub-menus featuring pages of number charts. There is obviously a high level of customisation and tweaking to be mastered in order to beat the game's later challenges. A mind such as mine relishes the prospect of a set of disciplines to master and overcome; I fear, however, without in-game guidance it may be a case of trial and error to see what works and what does not.

It is a game with some lovely beats: Barbequing meat cut from fallen creatures, gathering fruit husks, bugs and stone in order to construct ammunition in the field, learning new combinations of items; these all contribute to the feeling of questing, or living out a hunter-gatherer fantasy.

Monster Hunter manages to wrap its thrills with that 'just one more quest' feeling that keeps me coming back, in spite of the suspicion that it is simply grinding.

I actually found myself liking Monster Hunter Tri, in spite of its many faults.

Overwhelmingly, the feeling I get from the game at this stage - I've spent many hours playing already but still feel like I'm just starting out - is that it still has a lot more to show me. More variation to quests, maybe? Maybe some of those resistances and skills, which at the moment seems like irrelevancies in another language, will come into play and I will need specific tools to hunt specific creatures.

My only sadness is that, no matter how much I enjoy this game, I probably won't be able to enjoy it properly with friends.

[Chris Jarvis writes the Novel Gamer column where you can read his Monster Hunter Tri fiction.]


You can support Sid by buying Monster Hunter Tri

"Multiplayer modes are often the only parts of a game a play. Initially this was just because I was short on time, but more recently I've realised these are simply my favourite parts."