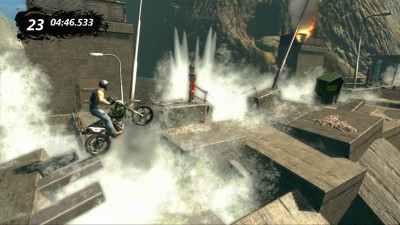 Trials Evolution is the follow-up to the hugely popular and successful Trails HD, allowing you to fulfil your wildest Motorcross fantasies.

Trials Evolution is a physics-based bike racing game, bound to make those of a certain age think back to classic 80's TV show, Kickstart. Rather than racing purely from point A to point B, racers in Trials Evolution must negotiate ramps, obstacles and slopes to make the best time.

The game features a track editor for you to create your own challenges. Supposedly, the editor included in the game is the same as the one used by the developers to create the game's content - so, anything you see in the single- or multi-player maps is fully available in the editor.

Trials Evolution is currently available for Xbox 360 via XBLA and is due for a Windows release very soon.


You can support Paul by buying Trials Evolution