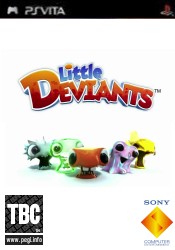 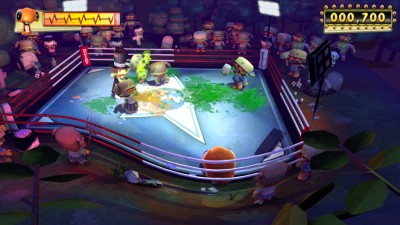 Little Deviants is set to provide party-style minigames for Sony's new handheld, with some raving comedy of its own.

Any new console needs a launch title which highlights the new possibilities of any specific new features. Little Deviants, a minigame collection for the Vita, is no exception, with some great new ideas growing out of the Vita's unique control setup.

The touch screen is put to good use, showing off a fight in a wrestling ring by allowing you to drag the ropes back with your finger to propel characters back into combat. Similarly the rear touch pad is used in an innovative new way by allow characters to be hit while they are behind doors, or by pushing up the landscape to roll the Deviants around.

In fact if there is one brilliant idea clearly expressed by Little Deviants it is the benefits of having a touch screen located at the back. For the first time we may be able to experience touch-screen gaming without the inconvenience of having to see past our own fingers. Being able to interact in this way and see what is going on at the same time will surely be refreshing.

Little Deviants is a quirky, humourous title, very much in the style and character of Raving Rabbids. This even extends to the shooting gallery sections, although in Little Deviants the video over which enemies are displayed is actually a live video feed from the Vita's rear camera.

Little Deviants is currently planned as a launch title for the Playstation Vita on the 22nd February 2012.


You can support Paul by buying Little Deviants