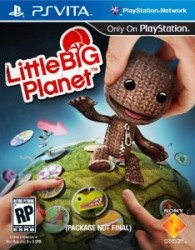 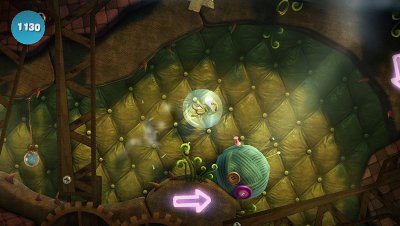 LittleBigPlanet has been released on PS Vita and been provided for us to preview/review by the publisher.

"LittleBigPlanet on the PS Vita offers a step up from previous handheld versions of the world-building and platforming hybrid game. We look at how our family responds to the creative side of the game on the new PS Vita console..."
- Family Gamer (Thu, 29 Nov 2012)

LittleBigPlanet returns in a handheld form for the Vita and promises to unleash the potential of the new controls through its hugely creative audience.

LittleBigPlanet is very much a game of two halves, traditionally. On the one hand, out the box it is an extremely addictive and bubbly platformer with a seamless mix of single- and multi-player action. The world of the game brims over with new ideas throughout its patchwork and scrapbook design.

On the other hand, it exposes its own inner workings by providing a comprehensive toolkit to allow you, the player, the opportunity to create your own games at the most intricate level. Far from being simply a modding tool to allow new platforming levels, LittleBigPlanet gives games unique access to the basic building blocks of the game, often allowing for new games to be created which are entirely different from the core LittleBigPlanet experience.

The Vita version promises to combine classic LittleBigPlanet gameplay with the new touch and gyro controls of the new handheld. What is most exciting is that this means that many folk who are frustrated game designers (but with no programming skills) will get the chance to try out their own touch and tilt game ideas - very possibly for the first time. Also a huge bonus is that for those who have made many costume purchases in the Playstation store, those costumes will also be available in the Vita version.

It's exciting to see LittleBigPlanet provided with some new toys to play with; it's even more exciting to anticipate how those toys will be put to work by the worldwide community!

LittleBigPlanet is currently awaiting a confirmed UK release date for the Playstation Vita, but is due for launch-day release in the US on February 22nd, 2012.


You can support Paul by buying LittleBigPlanet