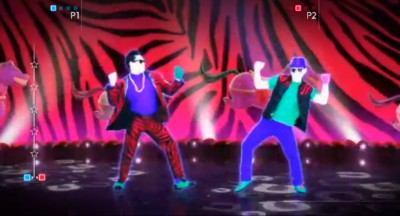 Just Dance 4 has been released on Nintendo Wii and been provided for us to preview/review by the publisher.

"Just Dance 4 comes to the Wii U with traditional Wii controls, bolstered by some new modes which use the Wii U control pad. In this FamilyGamerTV, we play this with our children and look at just why Just Dance 4 is the pick of the crop for families..."
- Family Gamer (Thu, 20 Dec 2012)

Just Dance 4 has been around for a while, just getting into its stride with the inevitable Gangnam Style DLC hitting downloads now. Now it's available for the Wii U and comes with a few extras.

The Wii U version of Just Dance 4 is functionally very similar to the Wii version. Without the camera trickery of Playstation Move or Xbox 360 Kinect, the WiiU version relies on the dancers' moves involving the controller to track performance.

Where the Wii U version stands out - as well as Wii U exclusive tracks for Just Dance 4 - is in the inclusion of the Puppet Master mode. Puppet Master mode allows a fifth player to join in the action by changing which dance moves the other players must perform during the song. The new Wii U controller serves as the menu for the Puppet Master to make changes to the track.

If you'd like to know more about Just Dance 4 we had a good look at the game with our gaming family in Family Gamer TV: Just Dance 4 (WiiU).

The WiiU track list for Just Dance 4 is as follows:

Just Dance 4 is now available for the Wii U, as well as Xbox 360 (Kinect), Playstation 3 (PS Move) and Nintendo Wii.


You can support Paul by buying Just Dance 4