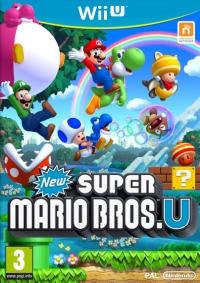 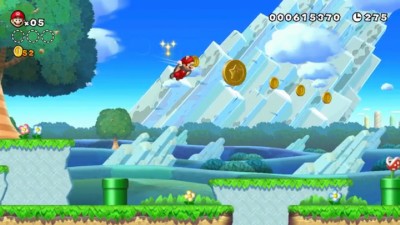 New Super Mario Bros U has been released on Nintendo Wii and been provided for us to preview/review by the publisher.

"The Nintendo Wii U is now here! To our amazement, one of our resident gaming families had not previously heard of the new console or the features it offers. In this Family Gamer TV, we put them in control of Nintendo Land and New Super Mario Bros U to gauge their reaction..."
- Family Gamer (Fri, 28 Dec 2012)

New Super Mario Bros U is the game Nintendo will hope sells the new Wii U console. It looks to be making good use of the hardware, but maybe not the new controller as much.

It's an oversimplification, but most Nintendo consoles have needed a really strong Mario title to convince many gamers to come to them. Recent Nintendo hardware has had to fall back on the appearance of the bouncy plumber to generate a sales spike and it looks hopeful that with the Wii U, New Super Mario Bros U may actually be a launch title.

It's hard to get any impression of the gameplay from screens and videos, since the true joy of any Mario title tends to be the experience of playing it and gradually discovering all the imagination and little touches that make these games such a standout. However it is clear that Mario's world is benefiting from the Wii U's increase in power and display quality over the Wii, bring the action to life in HD.

This doesn't sound like much of a revolution. It's worth remembering that Super Mario Galaxy (Wii) had a function for a 2nd player to join in a limited capacity by using a spare remote to collect stars on behalf of Player 1. Did anybody really use this feature? It always seemed like a pacifier for bored onlookers and spouses.

With the Wii U being a new system with a new controller, you'll be wanting to see how this controller gives rise to new play styles. New Super Mario Bros U isn't the game that will be showing off those new features. Instead what will be promised is the intricately crafted platform perfection that we've come to expect from the Mario series. This will be a solid must-have purchase for most Wii U owners. However, it is like that some quirks of the new controller will come into play in this title as fun cameos, but the core of the control experience will probably be fairly traditional.

New Super Mario Bros U will be released for the Wii U as launch title, expected at the end of 2012.


You can support Paul by buying New Super Mario Bros U