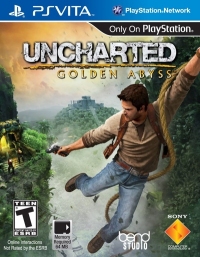 Other GamePeople columnists have reviewed this from their perspective - huh?:
Family Gamer (PSV) 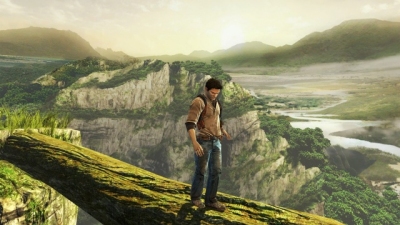 Uncharted: Golden Abyss promises the big console experiences on a handheld device - but this time has a few tricks to make accessibility the key.

I find it odd that handheld consoles are often sold on their ability to play home console games. Particularly since the games which reach popularity (and help to cement a platform's image) are generally titles created specifically for the handheld experience. Nintendo had Brain Training, while Sony had Loco Roco. However, Sony do consistently manage to shepherd more console-like experiences onto their portable machines with the last generation offering very credible versions of Burnout, Ratchet and Clank and Metal Gear Solid.

For me, the Uncharted series is the poster-child for big budget, tightly-directed single player adventure games. The story cut-scenes set a new standard in games for pace, writing, performance capture, humour and integration with the game-play; the third-person controls within the environment are successful to a point that would make Lara sulk and the shooting sections successfully blurred the line between adventure game and arcade shooter.

With Uncharted: Golden Abyss that promise of legitimate adventures 'on the go' is closer than ever. The newly announced PS Vita (ed: let's call is the PSV shall we?) seems to combine the graphical power we would expect from a Sony console with the touch screen and tilt control that is now almost a minimum requirement for a handheld gadget. But it's interesting to see how these control additions affect an established title like Uncharted.

The core gameplay of Uncharted: Golden Abyss seems faithful to the main titles from the PlayStation 3. While there are a host of additional touch-screen prompts and ways to control the game, I feel comfortable knowing that I can bring my experiences from Uncharted 2 and play Golden Abyss as though it were simply another Uncharted title. This is especially true now that the PS Vita has implemented the long-sought-after dual analogue sticks -- why have we been waiting so long for a handheld to do this?

The promise of legitimate adventures 'on the go' is closer than ever.

The touch controls are clever though and possibly even fix some of the issues which the Playstation 3 games occasionally suffer. The player now has the option to touch the screen where they want Drake to climb and he will automatically traverse near this point. This circumvents the occasional problem where identifying climbable surfaces is difficult. I sometimes struggle with judging jumps in Uncharted and often have to question whether I am doing the move wrong or whether the jump is actually out of reach. By providing a touch control to select distant ledges, I can at least allow the game to decide how far the jump will be for Drake.

Similarly, there are some nice touch controls for hand-to-hand combat. The ability to click an enemy on the ledge above to perform a stealth takedown is intuitive and, as above, negates that element of doubt over whether the enemy is close enough to perform the move. There is also a six-axis tilt control for directing Drake to jump away from a ledge.

There are only two drawbacks to the PS Vita controls that I have seen. The melee combat seems to introduce a slow-motion camera for touch-moves, which is in danger of breaking the fluid pace that makes Uncharted's combat so addictive. Secondly, the motion controls have to strike a tricky balance between being sensitive enough to trigger without have to resort to wild movements, yet resistant enough to avoid unintentional use. I would hate to be playing on Uncharted Golden Abyss while lying on my side only to find that Drake is jumping off into death. Hopefully the feature can be turned off.

The motion controls have to strike a tricky balance between being sensitive enough to trigger without have to resort to wild movements, yet resistant enough to avoid unintentional use.

While the new controls promise to add some nifty tricks and shortcuts to make the experience more suited to a handheld medium, I am comforted that I should be able to pick up Uncharted: Golden Abyss and drift into old habits of control and tactics. If there is any one game from my home console I would like to be able to carry with me, it would definitely be Uncharted.

Uncharted: Golden Abyss is due for release on the Playstation Vita, hopefully as a launch title (fingers crossed).

You can support Chris by buying Uncharted: Golden Abyss