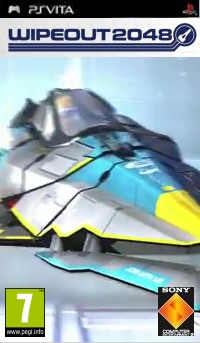 Other GamePeople columnists have reviewed this from their perspective - huh?:
Teen Gamer (PSV) 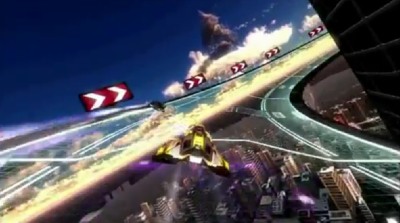 Wipeout 2048 PSV again promises to provide a run-out for a new console, while expanding the portable racing with some engaging multiplayer features.

The Wipeout series has long been used as a flagship title for Sony's new consoles, all the way back to the original Playstation. In fact, the series' trademark urban cool, flashing lights and driving electronic beats were plastered over video screens in nightclubs during the original promotion. This has been attributed by many as the turning point of gaming becoming more accepted in wider popular culture and understanding.

As is a popular trend among modern re-marketing of a familiar brand, Wipeout 2048 is a prequel, of sorts. Set at the dawn of the anti-gravity racing sport, Wipeout 2048 has done away with the stark, clean urban skyways and futuristic glass buildings and instead shows high-tech racing tracks winding through familiar looking brick cityscapes and through parks.

The racing is truly exhilarating, with a range of speeds to work new players up through the skills and experience needed to tackle the game at its fastest. The range of power-ups, randomly delivered, provides a strategic and personal approach to each track, with plenty of opportunity to level the playing field. The frantic pace is matched well by the large handheld screen, which provides enough detail to see the detail of the track ahead and approaching power-up pads.

Players on PS Vita and PS3 will now be able to race together.

This new entry comes with a host of new features based on the hardware available on the PS Vita, which are a showcase of some of the strengths Sony will be hoping to develop. These start with an AR viewer that allows Wipeout vehicles to be viewed on domestic surfaces in the same way that the 3DS allows player's Miis to be brought to life in the living room.

The tilt-controls and touch screen offer a modern take on the traditional controls, but it's doubtful that these will appeal to Wipeout veterans. I question whether anybody who has played Wipeout on the Rapier or Phantom speed settings would relish moving a finger to the touch screen to fire weapons or turning the console to steer.

However the video relay of the faces of the winning and losing players is a nice touch. It's something that the 3DS has promised but so far not really achieved. It's a nice way of connecting players with one another and providing the sense of community that Nintendo lacks.

The most exciting feature -- which Sony Liverpool promises will be available from the day of release -- is cross-platform multiplayer. Players on PS Vita and PS3 will now be able to race together, utilising Wipeout HD/Fury on the PS3. This suggests that Wipeout 2048 will have access to the tracks from Wipeout HD/Fury on top of its 10 new tracks. Whether the new 2048 tracks will be made available in reverse to the PS3 version remains to be seen. Whatever happens there is a range of multiplayer styles, from pure racing, to the deathmatch style of Eliminator which will hopefully make it to this edition.

Although some of the features feel like their inclusion is box-ticking on the new device, overall Wipeout 2048 is a generous proposition with a lot of racing options. It certainly demonstrates the strengths of the PS Vita well.

What will be fascinating about this cross-platform multiplayer is the level of skill players on each platform can achieve with the respective controls and systems. Once players of Wipeout 2048 have caught up with the established experience of racers on Wipeout HD/Fury it will be interesting to see who comes out on top, competitively.

I question whether anybody who has played Wipeout on the Rapier or Phantom speed settings would relish moving a finger to the touch screen to fire weapons or turning the console to steer.

Featuring a full online campaign as well as offline modes and the implementation of a trophy system, Wipeout 2048 will be an essential flagship for the new Sony platform - and should lead the way for similar titles from other developers.

You can support Chris by buying Wipeout 2048