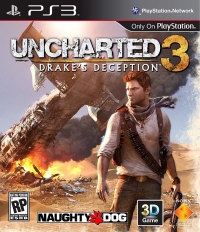 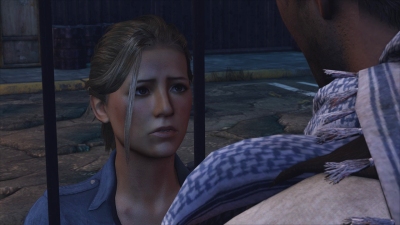 We map Uncharted's progress through three iterations as the game that played the filmic card and won -- but then backed this up with gameplay and characters.

The quality of the cut scenes was a real highlight for me. Not only how good it looks but how well synced the voicework and motions are. This actually meant that the cut scenes were a part of the game I looked forward to rather than skipped.

The environments themselves are some of the most beautiful and impressive I've seen. In fact I had a number of moments where I simply stopped to look around a new location -- it just looked so good.

Along with this is the way you interact with your surroundings. Water was a real highlight in both games - both how it looks and responded to your movements. But a really clever trick here was how the game blurred the edges of each playspace.

This worked really well for me, giving a sense of a larger environment than was actually there - and reminded me of Alan Wake in that respect. There were particular points where the game presents you with a gap too small to fit through, but then allows you to shimmy through at the press of a button. This takes the usual invisible wall and enabled you to pass straight through it. Really clever I thought, and very effective.

Other aspects of the game were all strong - characterisation, relationships and story. But it was the central gun-play mechanic that kept me playing through each Uncharted's ten or so hours.

Uncharted 3 Drakes Deception takes the action to the desert and dials in on Drake's relationship with Sully. Drake again persuades Sully (and again on the bases of shaky old manuscripts) to hunt for the fabled Atlantis of the Sands. The pair are propelled into the heart of the Arabian Desert where they face the, now series standard, supernatural threats as well as thugs with guns.

I disregarded Uncharted for a long time. From the trailers I'd seen it looked like a generic Tomb Raider-derivative action adventure. I only played it through recommendation from my brother. I think the original marketing undersold it. What sets Uncharted apart from the crowd is some great writing and some fabulously portrayed characters.

But that comparison with Tomb Raider never goes away, for me. Tomb Raider itself lost its way and went off the rails only to be re-invented later. Uncharted to me feels like a natural evolution of one aspect of Tomb Raider's gameplay. Interestingly, the parts of Tomb Raider I enjoyed the least were the gun-play and vehicle elements, preferring the climbing and exploration. Uncharted takes those elements and makes them work brilliantly.

What struck me about playing Uncharted - and Uncharted 2 especially - was how much I enjoyed the tightly directed experience. The cut scenes apart, I was impressed by the seamless way the game camera was redirected during gameplay. Older games generally telegraphed surprises through a sudden pause or a black screen. Uncharted somehow seamlessly integrates dramatic beats into the level. For example there's a moment in war-torn Nepal where you're running down the alley and suddenly a vehicle explodes, knocking you from your feet and closing off a possible escape route. It's clever on two levels - technically the engine and camera control is top-notch but I think it also succeeds in directing the player's attention to key areas and leading your expectations into those sudden moments.

There's a lot of tension in gaming between an on-rails experience and a more free style - often it's a disparity between big studios and indies. I think Uncharted 2 is a great advocate for a directed style. This is the big-budget summer blockbuster approach to games - if you're going to play a linear action adventure, this is one to see and I think the high bar for developers to beat.

It's also one of the few games that offers multiplayer that I can relate to. There's only so many flags I can defend in my life and UC2 provides some great alternatives. Gold Rush turns capture-the-flag into a dirty game of football with guns and grenades, trying to lob the treasure as far as possible to within a teammates reach. It's also one of my favourite games for co-op, offering quite a few different choices for my and my buddy. I think what I'd really like from UC3 is the option to play much more of the main story as co-op. I know that my gaming buddy and I would love the chance to run the whole thing. I don't know how much that would affect the direction though, because if there one thing that UC2's co-op loses in the translation it is that seamlessness of the experience. Still I think if anybody can overcome that hurdle, Naughty Dog are the best equipped to attempt it.

Uncharted was the impetus for me wanting to buy a PS3 initially. Hearing about a well-written game with the adventurous spirit of Indian Jones had me tempted, despite it not receiving the highest scores.

Having spent some time lusting after it before I bought the Sony system it had actually dropped down to a budget release before I got my grubby little hands on it. Unfortunately I was disappointed. The acting was great, but I found the story ruined by a drop into the supernatural. It is a Magoffin that works in Indie, not so much in Uncharted where the result of the supernatural is not a key, but instead just another thing to gun down.

And that is the key problem, gunning down, because Uncharted still relies on too much fighting. Exploration was great but my progression through combat sections was invariably slow and felt disjointed with the story.

Jump to Uncharted 2 and many of the same problems remain, but they managed to more seamlessly integrate the story, exploration and combat. While combat was still over exaggerated to the point of being ridicules, it none the less manages to seem correctly positioned within the fiction adding to the whole, rather than detracting from it.

Greg Edmonson loves what he does, maybe a little too much. Talking over a crackly long distant line, he quickly put me at ease as we both enthused over his recent Firefly and Uncharted projects... read now

Uncharted: Fight for Fortune is a card-game spin-off of the brilliant Uncharted series, for the PS Vita. It seems a world away from the gunplay and exploration of the main series, so how exactly will it work?.. read now

Videogames aren't famous for telling stories. They prefer to engage heart and mind with agency and interaction. Uncharted 3 Drake's Deception folds this premise back on itself in an effort to combine storytelling and action. What results is a game that is about more than shooting, clambering and saving the world... read now

While I enjoy Drake's adventures I do feel a great loss at the untold story of his relationships. Uncharted 3 cements these frustrations and provides a rollicking adventure that's as shallow as it is gorgeous. .. read now

Bob and Fred review Uncharted 3. Bob makes eyes at Rebecca Mayes and ends up singing his unauthorized Uncharted review song. Fred comes along begrudgingly for the ride. Oh, and helps with the "dums"... watch now

You can support Game by buying Uncharted 3 Drakes Deception