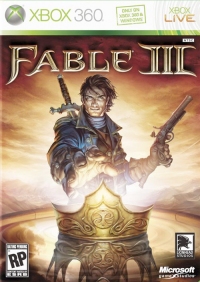 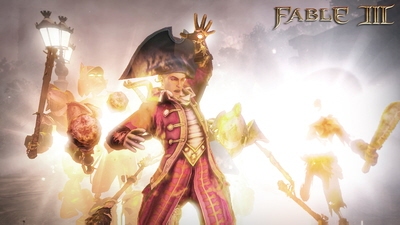 Fable III pulsates with life beneath its action adventure facade. For those with time to invest this is an experience with the ability to create a hundred joyful game play moments.

Fable III is cut from the same cloth as games from other English developers like David Braben and Ian Bell. Peter Molyneux has come much further in terms of delivery but underneath it all is the same essential desire to create a living breathing world.

It's what hooked me about Elite on my old BBC Micro and later to Frontier on the Amiga and it's the same essential buzz I got from playing Populous.

Like landing on a spacestation in deep space, watching the earth set from the moon or creating a flat plane for my people to build on, Fable III creates a world I want to spend time in.

Like those older games though, you also have to put the hours in to get the most out of it. While I didn't have the time to play games like this at university, now I've finished my studies I relish the thought of a game that asks a lot of me.

Fable III picks up with Albion moving into an era of industry. Steam powered devices take the place of manual labour, and there is the buzz of progress about the place.

You play as the child of the adventurer from the previous game, and at first much of it seems the same. But as you delve deeper into the world, it becomes apparent that Fable III is much more about your relationships to the other people in the world as it is about your own success.

You need to be careful about the commitments you make and the alliances you grant or refuse.

In addition to the social interactions you now have the ability to touch, hold and poke other characters in the world. This not only changes how the game feels to play, but reflects the type of story you are caught up in.

As the game begins you find yourself on a journey to become king. This is where much of the initial legwork is needed before the curtain is drawn back on the full experience. But you also need to be careful about the commitments you make and the alliances you grant or refuse, as every decision has a consequence and many can come back to bite you.

Generally, Fable III offers a bit of a graphical facelift - although it is still not a game that deals primarily in visuals. Everything looks a bit sharper and easier to distinguish.

Where Fable III excels though is create a genuine sense of place in each location. The day/night cycles grant a feeling of time passing and the rhythm of the opening and shutting shops and various meeting points for locals underline how much is going on behind the scenes.

There are times when this all works, and you get a glimpse of just how ambitious and long reaching the game's ambitions are.

There are times when this all works, and you get a glimpse of just how ambitious and long reaching the game's ambitions are. Again, it reminded me of moments trading in Elite, or watching the planets rise and fall in Frontier's simulated planetarium.

It's this, as much as the clever narrative or challenging missions, that keeps bringing me back to Fable III. Peter Molyneux, like Bell and Braben before him, has created an experience that stands out amongst other games as something both unusual and special.

I'm glad I've got the time these days to really get stuck into it - because with an easy 40 hours for the main story and countless more building my empire in side quests I'm going to need every minute.


You can support Sinan by buying Fable 3