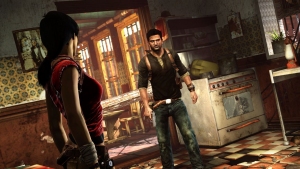 Treating you to a cinematic feast of a game, Uncharted 2: Among Thieves is a tremendous experience to watch and play. The stellar production values really made the characters and locations believable whilst always keeping me entertained with a Indiana Jones-style story. The only misgivings I had were technical deficiencies with the combat and a uncomfortable disconnect between Nathan Drake's persona and his in-game bloodthirsty actions.

Uncharted 2: Among Thieves is a videogame triumph. Nearly every aspect of this game for the Playstation 3 excels in every way conceivable - from the believable characters that give properly acted performances, to the Hollywood-besting scriptwriting and delivery of the story. I never felt it pushed the genre in a new direction or came up with some groundbreaking mechanic that made me stop and think in a particularly deep way, but it wraps itself up with such well-developed aplomb that I couldn't help but feel connected and care about the characters of Drake, Elena and Chloe.

But amid this excellent experience a few tiny niggles still existed and its here that I felt the soul of the game suffered a little. The problem I had was the combination of such vibrant and likable personalities with the action of shooting a lot of guys in the head. The body count by the end of the game reaches to the thousands, yet Drake and his companions rarely, if ever, observe or are affected by such an act. Only at the very end does Lazarovic, the twisted and insane warlord, throw this back in Drake's face - only for the game to brush it aside with barely a thought or comment.

The body count by the end of the game reaches to the thousands, yet Drake and his companions rarely, if ever, observe or are affected by such an act.

I know it's asking a lot for games to take a more serious approach in this regard, especially in such an popcorn action/adventure game like Uncharted 2, but a little more mental progression showing the effects of the players action would have been superb. It's probably more a testament to the convincing characterisation that I thought of this issue. If the attention to detail wasn't there then I doubt I'd be having problems with the characters morality at despatching hundreds of soldiers.

What the game does get right is the physical effect of the adventure. Drake, Elena and Flynn all go through explosive and painful moments that leave visual marks and crucially affect the way they animate. Being the lead, Drake is always getting beaten up, flung against walls or blasted off his feet. When he's stumbling around, bullet in his gut and blood dripping everywhere, it looks incredibly believable and I couldn't help but feel every painful step and grimacing crawl. His likable persona, akin to the rip-roaring treasure hunters of old movies and 30's literature pulled me right into the experience.

But what gives Uncharted 2 a deeper level of enjoyment is the character of Chloe. Whilst the others are fairly predictable and classical matinee idol stereotypes, she is complex, unpredictable and irrestibly sexy to the point of distraction. Her performance along with Drake and Elena leads to one of the most convincing displays of a love triangle I've ever seen in a videogame. The very fact I'm saying 'performance' shows how truly cinematic this game has evolved to be. In every scene there is a 'realness', a 'connection' with the interaction between the characters that I've never felt before.

There were times when I gladly sat back and watched this feature film-quality production unfold before my eyes, carried away by its effortless charm and professional style.

It's the natural way dialogue is portrayed both in cut-scenes and in-game, no matter how cheesy, that sells the experience so successfully. There were times when I gladly sat back and watched this feature film-quality production unfold before my eyes, carried away by its effortless charm and professional style. Though it never went deeper than a summer blockbuster film would, I felt Uncharted 2 told its story in such a convincing way that I was frequently emoting as the narrative unfolded. I don't believe a videogame has ever made me cringe when characters were hit, shout expletives at the double-crossing baddies or loudly laugh at some of the best delivered lines of dialogue - but Among Thieves touches some deep, cinematic gold dust inside of me that transfixed my mind and involved me in such an active way.

Yet for all its bombastic events and spectacular scenes, the most affecting parts are those understated moments that bring weight to the story. Drake's journal, used only for solving puzzles in the last game is packed full of fascinating insights into his character and the history between him and Elena. The little pressed flowers amongst the sketches of ancient artefacts and the clues to Shambhala are surprisingly touching, hinting at a deep and believable relationship that the game was so realistic in portraying.

Finding the emotional heart to game such as Uncharted 2: Among Thieves could be seen as a pointless and worthless quest. After all, the charm lies with its light-hearted nature and it excels in telling a beautiful and engaging cinematic experience without any need to get overly metaphorical or moral. But that in itself could be the real soul to Uncharted 2 - it doesn't try to be anymore than the best action/adventure game ever released. And it succeeds because it stays within its own realm and makes any other game look pale, colourless and devoid of personality - something it has itself in plentiful abundance.

You can support Adam by buying Uncharted 2: Among Thieves