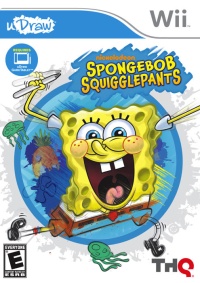 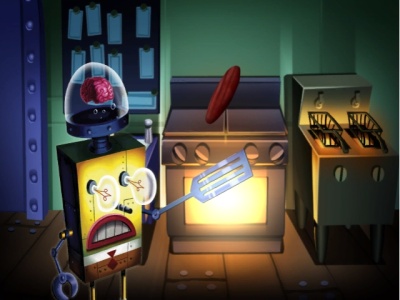 Spongebob Squigglepants Wii is a uDraw based game with a loose art gallery theme, but with a deeper debt to the Warioware series.

I'm not terribly familiar with Spongebob Squarepants. I know what he looks like, I know he lives at the bottom of the sea... and that's about it.

Spongebob Squigglepants didn't really leave me any the wiser. It doesn't really introduce the characters or their world. But I guess this is fair enough as anyone wanting to play a Spongebob game is probably more than familiar with the show already.

What's a little more surprising is that the characters don't really feature strongly in the game at all, appearing more as window dressing and getting little more than the odd squeak of dialogue.

Instead of being framed as a Spongebob adventure with an ongoing story, Spongebob Squigglepants has a live action framing sequence featuring Spongebob's biggest fan Patchy the Pirate (played by voice-of-Spongebob Tom Kenny) showing the player around a gallery of Spongebob related art.

These are very much Nanogames (or Microgames) rather than minigames, short and simple reflex games that are over in a few seconds. Spongebob Squigglepants requires THQ's uDraw tablet-and-stylus peripheral, and so the Nanogames use a combination of stylus-strokes and tilting/shaking the uDraw.

Essentially it's the Warioware template of five second bursts of fun strung together into a larger game, and it has the same pleasures and frustrations that that series has, with the individual Nanogames being fun or frustrating or sometimes both.

Shaking the uDraw to demolish a city is fun, and scribbling away to add ketchup to a burger or clean up a statue is suitably frantic. Tasks like flipping over different cards, or anything else that needs 'precise stylus strikes on the tablet corresponding to points on screen, are tricky and near-impossible to get right within the time limits.

There are some neat little touches that provide some much needed quirk, like the melodramatic music and excitable cinema audience in the B-movie round, and the game follows Warioware's lead by applying a wide range of cartoony and sketchy art styles to the individual games.

Melodramatic music and excitable cinema audience in the B-movie round.

In line with the theme of art and drawing, the game looks pretty great, although the live action sequences are repetitive and a bit cheap. There's also the obligatory free drawing option thrown in to allow players to sketch with the uDraw, but it's hard not to get the impression that the whole 'art' theme exists to justify using the uDraw as controller, rather than being key to the generic twitch gameplay.

Massive fans of the Warioware series who want more of the same, or big fans of Spongebob Squarepants, might get something out of this game's flurry of daft, disposable and often infuriating Nanogames. For me, Spongebob Squigglepants was just too slim and derivative to really be worth the effort.

You can support Mark by buying Spongebob Squigglepants