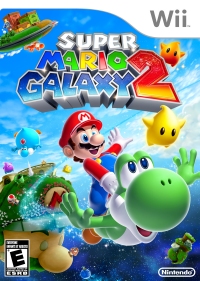 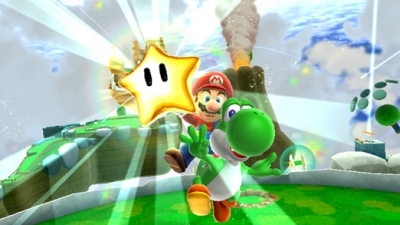 Super Mario Galaxy 2 is a technical marvel bursting with innovation and creativity. What shouldn't work somehow comes coherently to life in the hands of a team at the top of their game.

Some deserts are achingly simple while others impress by the sheer volume of sugar in the dish. Super Mario Galaxy 2 is a Knickerbocker glory of a game, every idea under the sun emerges at some point, but somehow it remains focused and delivers a beautifully balanced taste.

Technically the first Super Mario Galaxy was brilliant. Executed to perfection, and widely received as the best game on the Wii to date. But having played Super Mario Galaxy 2 I realise now that it was a little flabby around the edges.

The introduction was overly long, hardly interactive and simply too verbose. The inter-galaxy navigation was pretty but not very functional. The levels themselves were a joy but the extraneous elements had to be suffered between times.

Super Mario Galaxy 2 puts this right straight away with one of the best game introductions I've seen. Present on the pages of a book that skips between real action and pauses for the pages to turn, you are swiftly told the new plight of Princess Peach. Much less reading than before, in fact there was a moment when I was waiting for the cut scene to finish and realised that I was already in control. And as the initial action turns two dimensional there's a great nod to New Super Mario Brothers.

This slicker technique at getting you from one level to the next continues throughout. There is a lightness of touch here that reminded me of the design of Super Mario World on the SNES. Although there, they were constrained due to technical limitations, but here it is more wisely self imposed.

The galaxy map is now much more like that of Super Mario Brothers 3 with a simple branching frame. And you can pull up a progress list like in Super Mario World to see exactly how many stars and comet coins you have found at each location.

It's in the levels itself that the real reason to celebrate is found.

But it's in the levels itself that the real reason to celebrate is found. In fact I'd forgotten just how good platforming could be in the intervening time since the first game. Super Mario Galaxy 2 builds on everything that was great there, and adds some unique twists of its own.

Yoshi is perhaps the biggest headline here. Not only ride-able in the game, but his tongue attack is now used for all manner of things - eating, swinging, stunning and pulling. When riding the little chap, as well as getting an extra line of music added to the orchestral backing, the Wii-mote pointer changes from the star to a red ball that lets you target anything in range to a helping of red dinosaur tongue.

There are plenty of other additions. My favourite was the Cloud suit - Mario looks wonderfully earnest running around the level with a grey floaty cloud for a hat as he sprouts platform clouds here there and everywhere. The Rock suite creates some really novel game play additions and opens a range of new doors in the game when you get it.

Each new ingredient thrown into the mix feels as if it threatens to break the finely balanced taste - but each is so well blended that concerns are soon banished and your brain is left to stretch around the latest puzzle.

It's more about encountering a design team at the top of their game.

As in the original, the game is sensibly paced. A little slow at first for experts, but challenges soon start coming thick and fast. It also pulls the same trick as the original - of splitting in two. More casual players will be content with collecting the original 120 gold stars, whereas the hardcore can doubt carry on to pursuit the 120 green stars.

But all this detail doesn't really account for why Galaxy 2 is such a special game. That comes down to how exhilarating it feels to play. But this, like has always been true for Mario games, is less about the rush or sheer speed of the experience - it's more about encountering a design team at the top of their game.

Playing through the game you can't help but be aware of the minds behind this marvel. This is not just ingenious, but also well balanced, always fair and never inconsistent. You know where you are with Super Mario Galaxy 2 because you are spending time with some old friends. Not really the characters themselves - familiar and cute as they are - but the minds behind it all.

It is on this display of human inventiveness that Super Mario Galaxy 2 makes its stand.

It is on this display of human inventiveness that Super Mario Galaxy 2 makes its stand. And much like trying to describe why a Pixar film is so compelling to watch, you have to play this to really understand it. Because, ironically, there is more humanity to be found here than there is in a hundred life-aping role play games.

Super Mario Galaxy 2 takes you to the brink and back time and time again. Jumping, sliding, climbing and floating your way to each new planet is as familiar as it was to jump on that very first Koopa in Mario Bros back on the NES. But somehow for all his prestigious beginnings, it's only now that Mario is starting to feel at home.

You can support Simon by buying Super Mario Galaxy 2

"Gaming technology and techniques fascinate me, always have and always will do. They've driven me to a gaming degree, and aspirations to a whole lot more. Here though, I'll be reviewing games for how they put their technology to work to deliver a compelling experience."