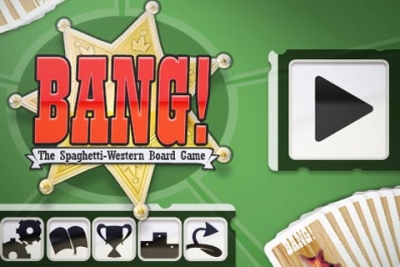 Bang! iPhone deftly recreates the classic parlor game. Secret roles and special abilities combine with a well balanced card set to create an intriguing and addictive experience. Add to this the cross-platform multiplayer and this is an impressive iPhone/iPad/PC offering.

Unlike other iPhone games that simply replicate the physical version of a board or card game electronically, Bang! brings some interesting new features to bear in its iPhone/iPad/PC release. This hinges on cross platform plat that will enable iPhone, iPad and PC gamers to compete against each other online.

Like the parlor game it's based on, Bang! (Board game) is a strategic card game for up to seven people where players race to kill each other and work out which role they have each been assigned. Like the popular Mafia (Werewolf/Assassin) parlor games the intrigue about who is playing which role is as much fun as winning or losing.

Unlike the board game version (where you need at least four players) you can play Bang! iPhone with just one player. Before you start each player is dealt a random character card (face up) and a role card (face down) - this determines who they are (and their special abilities) as well as their mission for this round. The game then starts with players drawing and playing cards in turn.

As play commences players take it in turns to draw and play cards. To shoot at another player a "Bang!" card is required and you can only shoot those next to you unless a weapon upgrade is in play that increases their range. Defending players can avoid being shot by playing a "Missed" card.

On the iPhone version much of this complexity is hidden away as the computer applies the rules automatically.

Other cards include "Beer" that restores a one block of life, a "Whiskey" card that restores two blocks of life and a "Jail" card that puts another player behind bars. Most of the cards are pretty easy to understand and have symbols that describe the card's effect.

Bang! is a little more complex (and perhaps less flexible) than those classic parlor games, but the structure it brings to the table (ed: so to speak?) makes it a more accessible game for a wider audience. It also creates a strong sense of the western theme with the different roles, character and abilities.

On the iPhone version much of this complexity is hidden away as the computer applies the rules automatically. This makes the game a lot easier to play - but at first a little more difficult to understand as cards fly left and right. There is also a well written tutorial that talks you through a sample game. In fact this is one of the most impressive bits of game introduction I have come across on the iPhone as it seamlessly joins instruction with your first game.

Where the electronic version looses out to its physical counterpart is in the psychology of watching the other players.

Where the electronic version looses out to its physical counterpart is in the psychology of watching the other players. Like playing Poker online, you don't have access to the visual tells of each player to make your guesses about who is playing which role.

The ease of play and quality visuals - not to mention the novelty of playing across different technology more than makes up for any shortfall in the experience. The game will even offer the different expansion packs that have evolved over the years.

Like any good electronic rendition of a physical game, Bang! on the iPhone is an excellent gateway into the physical card game - and the wider world of card/board games.

You can support Nathan by buying Bang!

"I review a mixture of established iPhone titles and new releases from across various genres. My reviews place particular emphasis on how each game makes use of the unique potential that the interface of the iPod Touch offers."