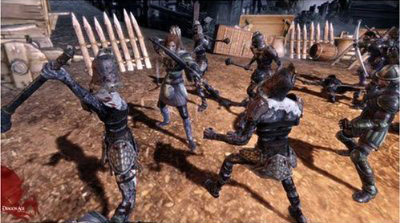 Taking the fantasy Role Play Game - RPG - genre and pushing it into darker territory, Dragon Age Origins on PC, PS3 and 360 entrusts you with the survival of humanity in a war-torn and brutal world. Telling a tale of violence, lust and betrayal that will keep you transfixed to the screen. This epic game from the makers of Mass Effect and Baldur's Gate brings a darker edge to any previous Role-playing games and pits you against the Darkspawn threat. With over 80 hours of gripping story, Dragon Age shows that the classic RPG has finally come of age - with dramatic results.

An experience full of unflinching themes and characters, Dragon Age Origins for the PC, Xbox360 and PS3 is the spiritual successor to Baldur's Gate 2 - one of the most acclaimed role-playing game ever made. The developers, Bioware, have taken the best parts of the classic RPG genre and given it modern treatment in terms of impressive visuals and an accessible layout. But what they've done that's more impressive is the dark direction the gameplay and story has been taken in.

You play as a Grey Warden, one of the last members of an ancient order that defended the land throughout the centuries. The story begins with you being betrayed by a trusted general and your mission is to hunt him down and bring him to justice. This is just the starting point though - the real plot deepens dramatically and contains mature themes that are simply incredible to see in a game. The multifaceted characters and the situations you'll deal with can all be tackled in a variety of ways. Some will need diplomacy and tact, whilst others can be approached with a more aggressive nature.

This change in approach is no more obvious than with the races that inhabit the land. Instead of floaty Elves and grumpy Dwarves, the world of Dragon Age feels far more realistic than other fantasy settings. The themes of slavery, betrayal and lust are all portrayed in such a mature way that you can't fail to be moved at certain events or sucked into the fiction like never before. The decision to voice act every single line of dialogue is also a move that helps to immerse you into the experience and means you're never taken out of the game by awkward silences or odd effects.

Your own character is equally as unique with an impressive range of customisation options from the off. Each class and race comes with its own Origin Story - a feature seen in Mass Effect but expanded and deepened here - that affects everything from combat through to the way other characters will talk and team with you. This Origin will also combine with your dialogue choices within the game and the decisions you make at critical times to create a large variety of possible endings. The attention to detail is second to none and makes you realise how lovingly this dark world has been crafted.

The variety of members that will join your team is also interesting - I found the interactions within my own group to be the most fascinating of all the encounters and battles within the game. The relationships you can forge are the most advanced I've seen with the themes of friendship, hatred and violence coming up in a consistent and realistic fashion. But the most rewarding is the theme of love with the option to further relationships with several characters whilst also balancing the fate of the world at the same time. The moral choices offered in this game were some of the most difficult and complex I've ever experienced, going far beyond the scope of other games and showing a maturity that's unparalleled.

The incredible depth and length of Dragon Age Origins is reason alone to acquire this game and delve into its impressive story. But the mature nature of the content and the way its presented really show how far video games have come in recent years. Dragon Age will shock and amaze, it will also move and engage you in the way only a true epic story can. It's full of unique moments and situations that will live long in the memory - but as a whole package Dragon Age Origins for Xbox360, PS3 and PC is un-missable.

You can support Jan by buying Dragon Age: Origins