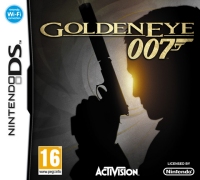 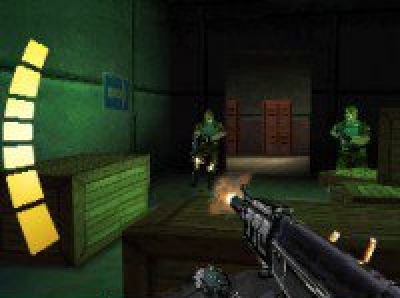 GoldenEye 007 DS charmed us with Dame Judi Dench's dulcet tones, but even that wasn't enough to keep us from going back to play Black Ops DS.

GoldenEye 007 DS comes with some pedigree, and not only from the eponymous N64 game. N-Space has turned their hand to a few first-person shooters both on the Nintendo DS and elsewhere.

Each year they convert Call of Duty from the big ticket platforms to the DS. And indeed this year is no different as Back Ops (DS) recently started hitting shelves. But actually it is different, as they are also delivering GoldenEye 007 on the DS. The conundrum is of course which is the better game - this depends on what you are looking for as we shall see.

The DS version takes quite a bit of art and voice work from GoldenEye 007 (Wii). This helps give the experience a little more substance, although the appearance of Daniel Craig still feels odd for a GoldenEye game - could they not find Pierce Morgan?

The story has been adjusted a bit from the 1995 script, and even more-so on the DS than the Wii. And because we don't jump from the game engine to pre-rendered scenes the DS is actually much more successful at telling it's story - the Dam Jump in particular had a few spying tingles run down my spine.

Things are controlled, as ever, by a combination of the stylus and D-pad. This works well for more dextrous players, but I found that my son had to default to the D-pad and face buttons because he simply couldn't master the complexity. He says it's because he's too used to the 360 dual-stick controls, but I'm not convinced.

the Dam Jump in particular had a few spying tingles run down my spine.

The game itself proceeds in a linear fashion, as you would expect. The enemies are obviously just cycling through pre-scripted behaviours so it really feels like killing robots than people - which I guess may not be a bad thing.

Targeting on the small screen is fiddly and I found it difficult to pull off head shots with any real consistency. In fact I think these may just be doled out at random to give the illusion of accuracy.

Although the Wii version suffers from similar inconsistencies, I was expecting a little more from N-Space given their track record. This combines with a strange invulnerability that enemies have if shot non-fatally to make the gun play feel stilted at best.

This is a real shame, because the basic concept of having a GoldenEye game you can play on the move with the nuanced stylus controls is actually very appealing. The spying premise here seemed a much better fit for the DS hardware (and audience) than the all out warfare of Call of Duty.

While the Spy aesthetic is a big draw on the DS, Black Ops offers a more rounded shooting experience.

Multiplayer is again where the game excels though. Adding in human opponents does away with many of the AI shortcomings and the game really comes to life. You can play with up to six players locally or online via the single cart share system, and that all works pretty well.

Unfortunately GoldenEye 007 is outflanked on all sides by Black Ops DS. Not only are the environments more varied there, and enemies a little bit more challenging, but it also has the excellent Zombies co-op mode. While the Spy aesthetic is a big draw on the DS, Black Ops offers a more rounded shooting experience on the DS.

You can support Andy by buying GoldenEye 007