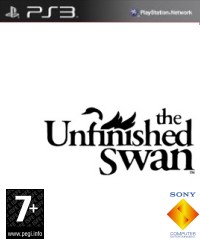 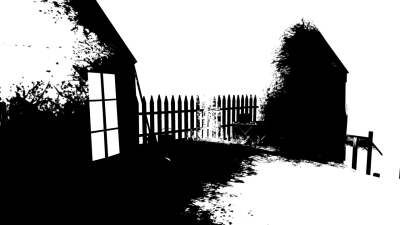 Unfinished Swan is an unusual puzzle game, told as in interactive fairy tale. Whilst the control scheme may be changeling for very young players, the games visual style and simple physics-based puzzles prove very entertaining when played-though as a family.

Unfinished Swan tells the story of a young boy's dream about a lonely king of a mystical land. The boy has recently suffered from a family tragedy, so his experiences and emotions are portrayed in the dream world.

At the beginning of the game you the boy finds himself transported to the dreamscape in an entirely white world: no features in the world are discernible other than distance footprints of the title's Unfinished Swan.

Luckily the boy is given a paintbrush, which is manipulated in the world using standard first-person controls on the dual-shock controller, or an optional Playstation Move wand-controller. Using the paintbrush he fires black paint splurges into the pure white world: landing on adjacent objects and surfaces and revealing the navigable world. The effect is visually arresting and stark.

Both my wife and three year daughter watched and participated in dispersing the paint to reveal the geometry around us. We found creative ways to dispense the paint and soon discovered that sometimes less it more. The paint is also used to complete wall paintings that contain the pages from the fairy tale.

These paintings, when revealed, narrate the tale of the lonely king, his life and the surreal world we are in. My daughter found these little narrated morsels enthralling, and they remained charming and whimsical for the entirety of the game.

As you progress in the game the world becomes more detailed, and new variations on the paintbrush mechanism are employed: using water from the brush to grow vines, a pencil-line to draw blocks, and water splurges to wash and move objects.

Most of the puzzles are fairly simple, and only the hidden balloons - an optional collectable item - really stretch your logic and reasoning. We were able to work as a team solving the puzzles and experimenting with the game's paintbrush: one of the adults would 'drive' the game with the others making suggestions of things to try. We found it a lot of fun, and my daughter was really engaged in the both puzzle solving and experimentation.

Unfinished Swan does get a little dark towards the end of the game, and there is some minor scares involving spiders in the dark. However, it is no worse than a typical children's fairy tale, and the game soon returns to lighter mood as the story concludes. It's also worth mentioning that Terry Gilliam makes a cameo appearance at the very end of the game, which feels entirely appropriate given the surreal dream world.

We found Unfinished Swan to be a great game to play collaboratively as a family.

Unfinished Swan took us around three hours to play through, but there are opportunities to play through again to find those hidden balloons, dotted around the game world. Some of the trickier balloons require special power-ups that can be unlocked by completing the game and finding balloons.

We found Unfinished Swan to be a great game to play collaboratively as a family. It is charming, visually stunning, and thoroughly engaging throughout. The relatively short play time, beautiful game-art, and variations on the paintbrush mechanism help keep the game fresh and interesting for both player and viewer alike.


You can support Andy by buying Unfinished Swan