Other GamePeople columnists have reviewed this from their perspective - huh?:
Returning Gamer (360) 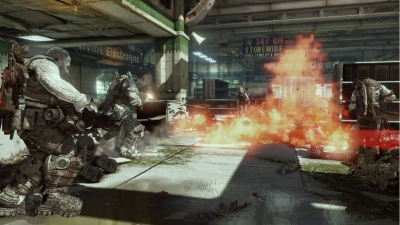 Gears of War is the game that proved the power of the Xbox 360 for the mature end of the gaming market. It to some extend re-invented the shooter genre - combining as it did a high level of presentation with excellent controls and playability.

Shooting games present a world in which the character must use shoot their way out of dangerous situations. They provide the player with an array of weapons each tailored to specific tasks. The action unavoidably involves a combination of fisticuffs and gun based fighting that dictates the violent nature of these experiences. Beneath this harsh exterior though is often an intricate tactile game - and this is usually what drives the player.

Although Gears of War is famous for its good looks, the gameplay itself is actually more revolutionary. Its combat and cover system continues to set the bar for shooters. The ability to easily duck in and out behind cover creates both tactical and dramatic impact. This drop-and-pop (so called to reflect players dropping in behind cover then popping out to shoot) play mechanic means that players can make better use of structures in the environment for their tactical advantage. This radically affects how the game can be tackled and to some extent makes this more of a thinking man's shooting experience (although this never strays all that far from the adrenalin rush of hard combat).

Gears of War visually impresses in ways that intelligently add a sense of involvement and realism to the action. Remember the first time you saw Saving Private Ryan in the cinema? That same overwhelming shock, horror and connection to the action on screen is found here. This results not least from the shared use of camera shake these two experiences employ.

As a third person shooter, players view the action from over the shoulder of the on screen characters. This not only enables more accuracy when finding cover, but introduces atmospheric camera effects when the players are running.

Players are drawn to Gears of War by its loud brash (and adult/gory) presentation. There are few games around that can generate the same level of involvement in so short a time. Being chased down a hallway by an enemy, only to find yourself in a dead end, turning to face your tormenter and finding a chainsaw finishing you off is a really effecting experience.

On its own this would stand as a pretty special horror filled experience. Combined this with the great tactical gameplay and efficient enemy characters and you have a game that extends beyond its initial cheap shock tactics - and can be enjoyed for a long time.

It can take a little while to get used to the controls in Gears - the cover system and twin stick movement are well implemented but need to be learnt. Once up to speed, players can progress through levels in hour long sessions and should have a good twenty hours before the game is finished.

However, the game benefits from extended play sessions as this allows the atmosphere to grow, as both gore and horror elements work to unsettle the player.

With its 18 certificate, this is unlikely to be a game young players would be comfortable with. Even for older teenagers, parents will probably want to try out some levels themselves before letting them loose. Those on the cusp of being comfortable with a game of this style will benefit from sharing the experience with an older player. As with horror films in general, Gears certainly raises some interesting topics - something that should ideally be given space to explore outside the game.

Intermediate players may find the full-on shooting gameplay and the intimidating visuals a little daunting at first. Those that persevere will discover a game that hinges more on tactics and strategy than gore and fear. If they have a more experienced partner with whom to team up all the better.

Experts are probably best placed to enjoy Gears of War straight out the box. The gameplay will be familiar, but with some well implemented innovations - such as the use of camera wobble and the cover system. They will enjoy the cooperative play options (that also opens up the option of helping intermediate or novice players through the experience).

You can support Andy by buying Gears of War