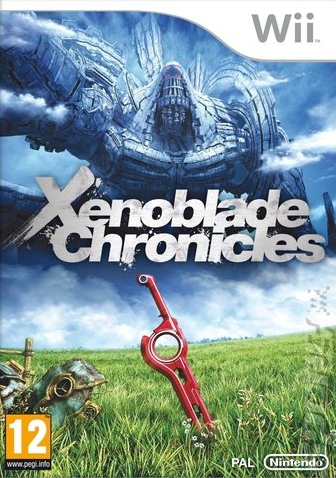 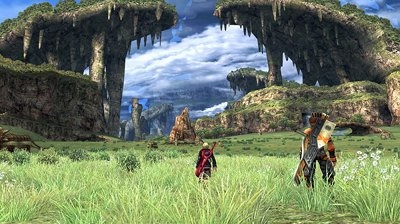 Xenoblade Chronicles is a surprising stab of adrenaline to the soul as the Wii stumbles anaemically towards the end of its life cycle for core gamers. A parable about Man versus Machine, it delivers drama, story and a unique world to journey in.

As Shulk, the orphaned protagonist, Xenoblade puts you in the midst of a war between Homs and the Mechon taking place over the most unique setting I've ever played in. This isn't a world copied from usual fantasy or science fiction with its hermetically sealed races and cliches, as the twin lands of Bionis and Mechonis have been borne from the bodies of two enormous dead Titans.

This setting alone does enough to tug at the soulful heartstrings I look for in a game. But, beyond the story and characters it's the world itself that has to deliver something tangible if I'm going to reach the end of an 80-hour RPG like this. And Xenoblade delivers on nearly every level.

Rarely does a videogame draw upon a self-created mythology.

Initially you're in control of Dunban - the heroic warrior defending the Homs Colonies from a devastating Mechon attack - before the game takes the pace down a notch and shifts forward a year to Shulk. The change of protagonist from a strong powerful hero into a mild, gentle soul is usually achieved poorly in other games - nerfing you in plain sight with no other motive than to tease the full weight of the battle system. Here though, the change feels natural and Shulk as the main character is immediately likable and sympathetic.

Aided by brash Reyn and caring Fiora the opening act portrays life in a colony struggling to recover after the Mechon attack. This opening completely hooked me and I fell victim to the plot-twist that sets you on a path of bitter revenge.

Japanese RPGs are not unfamiliar with villages or pastoral towns and often turn the lives of inhabitants on their heads as a means of providing the basic story beats to push on. Xenoblade does this too but without slipping into contrivance and keeping the pace of the story intact.

The appearance of a Faced Mechon adds a human element to the mindless metal killing machines. It's a turn that matches the drama of the battle system you learn to control with the Monardo - the magical sword that underpins the entire drama of Xenoblade.

Like the darker mythology of Excalibur, possession of the Monardo comes with a hefty price, as demonstrated by the first few hours where our picture-book hero Dunban is crippled after saving Colony 9. It was this attribute to an heroic weapon - the bitter pill of success - that makes Xenoblade unique.

It's rare for a videogame to draw upon a self-created mythology in the same way an Arthurian legend would and the slow unfolding of the Monardo's power (and its eventual price) was the best of these dramas - videogame or otherwise.

Even with the restrictive hardware the impressive vision of a world created around the dead bodies of two ancient Titans is utterly compelling.

This didn't always hold. The story itself, of the battle between the Homs and the Mechon, of the pursuit of revenge, of love, the true nature of the Monardo and the relationships between all the characters all interwove beautifully but had to do so in spite of the faltering dialogue.

Some this could be down to the Wii's limited hardware. Character faces are capable of expressing about three emotions and the final pacing of the spoken words appeared to rely on something as infuriatingly arbitrary as the disc spinning up. As a result conversation felt stilted with many scenes playing out in a laughable fashion.

It was never enough to destroy the soulful nature of Xenoblade -- thanks to the unique locations the game takes you on. Even with the restrictive hardware the impressive vision of a world created around the dead bodies of two ancient Titans is utterly compelling. Xenoblade even manages to make the immense plains of Final Fantasy XIII's Gran Pulse look like back yards compared to the vast and exploreable fields, mountains and valleys.

Xenoblade's other trick is the ability to see the future thanks to the Monardo blade's mysterious power. Time travel has been served well in RPGs. Chrono Trigger set the bar back in the SNES days and has arguably never been surpassed - with only Radiant Historia coming close. Xenoblade integrates the idea of time so completely into its gameplay and story that I feel confident this sets a new high watermark for the concept.

The vision of all those unique environments is astounding and unforgettable.

This foreknowledge of the future doesn't just reside in the untouchable story segments of Xenoblade. The developers have cleverly integrated it into item gathering and combat. Picking up a nondescript item whilst running through Bionis' glorious fields can sometimes show a brief moment in the future.

These tiny moments may be throwaway gimmicks -- telling you to keep what junk you've picked up for a later side quests -- but sometimes they drop story-based threads into your conscience hours before you know what they mean (ed: Alan Wake could learn a thing or two).

Again and again I found myself moved by the depiction of the worlds in Xenoblade. When I look for the soul of a game it usually only resides in the story -- of characters interacting and producing drama or themes that resonate with me personally. It's rare to find a videogame world of such depth, colour and uniqueness.

As I stood on the edge of a precipice and saw the shadow of the Bionis' arm reach upwards into the unseeing distance it was clear that Xenoblade's soul is with its setting. The vision of all those unique environments is astounding and unforgettable.

Sure, the level of visual quality in Xenoblade Chronicles is hampered by the Wii's hardware but its charms and beauty shine from the love poured into this world and the characters that inhabit it, rather than the resolution. Nothing may be truly revolutionary in either story or gameplay but the sheer breadth of content and the realisation of an unusual world is enough for its soul to blossom into an epic that should be played and loved without reserve.

You can support Adam by buying Xenoblade Chronicles