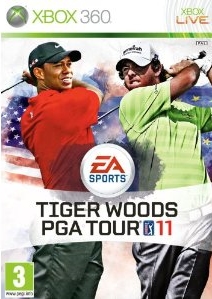 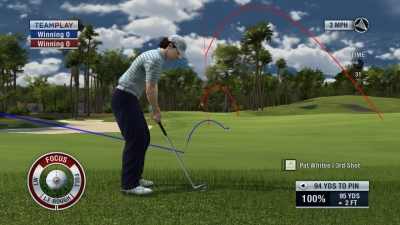 Tiger Woods 360 invigorates things with a 24 person multiplayer and Ryder cup mode. But it's hard to live without the Wii's real swing for anyone who plays in the real world.

Tiger Woods survives as a viable brand and this year's 360 continues in strong fashion. New courses, online team play and the first appearance of the Ryder cup combine to offer enough reasons for golf fanatics to update.

While I'm no pro, my handicap is slowly whittling down to something near respectable, and I was keen to see what my real world game could learn from this year's Tiger Woods on the 360. I was surprised by my experience though. Rather than the usual tweaks to the swing, putting and chipping mechanics, it was the team play that really made the difference for me.

People who don't play golf will think of it as a rather solitary pursuit. In actual fact, for me at least, golf is all about the people I play with. Not just those that share a particular round, but those whose stats I chase and score cards I envy.

By including the new head to head mode Tiger 11 taps straight into this and revolutionised how I felt about playing golf on my console. Up to 24 people can compete like this in teams of twelve. As you play each hole the other players shots are shown with real-time trajectories in the colour of their team.

It's a simple addition, but one that really adds to the tension, especially if you are a slower player like me - which I understand is not unusual for those of us that come from the real fairway. As I come to put, many of my team and opponents have already finished. Holes that are close often comedown to the last few players, so as you step up to sink a long birdie or hold for par the pressure is really on - not to mention the fact that everyone else is watching your progress in real time.

It's a simple addition, but one that really adds to the tension, especially if you are a slower player like me.

I would have liked to see a team play local game like this as well though. I've often gather a bunch of my golfing buddies around for an evening's play only to realise that Tiger still only supports four player local multiplayer. It's not as if we are all playing at the same time so surely we should be able to play with eight of us taking turns.

The other features this year had less of an impact for me, and seemed like the usual tweaking around the edges we get from Tiger on the big consoles. That said, being able to play through the Ryder Cup at Celtic Manor was a nice to have bonus this year.

I also liked the greater emphasis on tactical role play that the Shot Focus feature brought to multiplayer games. You have to choose the right moment to use your boost, spin or accuracy enhancements to strike the winning blow. This has got me out of a spot a number of times with a perfectly weighted chip-in or drive to within inches of the cup.

Top players are those that dial down to the minutiae of their game to make the tiny adjustments necessary to up their percentages.

Other tweaks like the True Aim camera and skills challenges didn't really add much tot he experience for me. Not surprisingly, I'm really after the meat of the game rather than these periphery additions. The True Aim camera actually made me feel less comfortable with the hitting mechanics as it uncovered the arbitrary nature of using your thumbs to hit the ball - quite the opposite to this year's Wii version of Tiger where the first person perspective is pretty magical.

For golf, like many drawn out sports, the devil really is in the detail. Top players are those that dial down to the minutiae of their game to make the tiny adjustments necessary to up their percentages. To this end, I think I may have spent as much time in the Swing Tuner tool as actually playing the game. Frustratingly though, I don't seem to be finding the same level of improvement for my extra effort here. But still, the illusive offer of a swing tuned perfectly to my abilities is enough to keep me coming back for one more refinement.

If you have last year's Tiger Woods game it is always hard to justify buying the next.

The package this year is not dissimilar from previous outings, and as always if you have last year's Tiger Woods game it is always hard to justify buying the next. However, if you like the sound of the turbo charged online multiplayer and Ryder Cup mode there is probably enough here to warrant the purchase. However, if you haven't experienced the Wii's MotionPlus swing you may want to check that out first - I'm sure next year we will have Move, Kinect and MotionPlus versions of Tiger.

For serious golfers though, the high fidelity visuals and deeper pool of players online is enough to keep Tiger viable on the 360.

You can support David by buying Tiger Woods PGA Tour 11