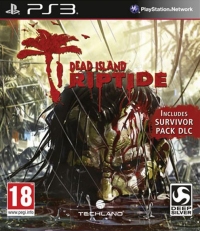 Dead Island Riptide PS3 is at its best as compulsive as the first game, but don't play it alone - not because it's scary, but because you'll need friends to motivate you through the shoddier bits.

The first Dead Island was a surprise hit. Technically rough around the edges, and undoubtedly obnoxious, but also kind of addictive, it came out at a quiet time of year for new game releases, when the prospect of a crass zombie bashing RPG seemed just the tonic.

Success breeds repetition in the hope of more success, so here's more of the same in the form of a relatively quick sequel, Dead Island: Riptide. And when I say 'more of the same', I really mean it. They could have called it Another Dead Island, as Riptide is basically the same game but moved to a different, very similar tropical island.

That island setting is key. Games can take you anywhere, and there's great pleasure in virtual tourism that takes you to epic space stations or fantasy landscapes.

But there's also an underrated appeal in an action RPG set in something closer to the real world, and the wrecked paradises of the Dead Island games hit a sweet spot between recognisable reality and wish fulfilment - it's set in believable real world location, but it's an exotic and attractive location far away from drab suburbia.

To vary things up, Riptide doesn't start off on this new island. Instead it opens with a sequence on board a ship, which just ends up echoing other zombie games with sequences on storm wracked ships - Cold Fear and Resident Evil: Dead Aim sprang instantly to mind as I negotiated the pitching, rain-lashed deck.

The ship sequence is in some ways a flashier version of the first Dead Island's similarly linear hotel opening, a mechanism to pace out a tutorial sequence in a constrained manner before hitting the open world, but it's also an elaborate, extended narrative reset to take the survivors from the first game, nix their happy ending and dump them on a different zombie infested paradise island to start all over again.

Essentially stripping the characters of their hard earned victory would be utterly objectionable - the start of Alien3, anyone? - if the characters weren't so ghastly that you're at best unmoved by seeing them suffer. This charmlessness is more endemic than the zombie plague - player characters in Dead Iskand remain a braying bunch of aggressive, obnoxious dicks, and most of the supporting characters aren't much better.

Beneath the unpleasant characters and swear-filled dialogue, the underlying story of Riptide isn't up to much, instead introducing a generic big money corporate threat to the already by-the-numbers outbreak plotline. As before, the story drips into the game via an endless runaround of fetch quests.

So, the story the player is served isn't up to much, so what does appeal about Dead Island Riptide?

The appeal lies partially in the sense of place and the freedom that the open world and mission structure provides. Yes, they're nearly all fetch quests, but who cares when you get to jump into a jeep and drive it for miles through lush jungle, running over zombies on the way? The main narrative might be unsatisfying, but the sprawling island setting is an excellent playground in which to create your own adventures, and some of the emergent incidents are quite striking and memorable.

There's also a pleasing engagement with that world and the action. The first person perspective keeps things tight, while the melee combat is satisfyingly sloppy and chaotic, especially when you get swarmed - few games have so effectively recreated the zombie fiction staple of savagely fighting through a horde of the undead as the Dead Island games, and it can be genuinely shocking to survive such a skirmish through sheer brutality and see the carnage you've wrought.

It's that roughness that allowed me to let some of the games many glitches and dodgy patches slide. While something like Left4Dead may be a far smoother experience - and, don't get me wrong, is a far better game than either Dead Island title - it's still a shooter, and there are a lot of shooters about.

With its focus on melee combat, and enjoyable quirks like the rage-powered attacks and the depleting meter that causes you to seize up with exhaustion mid-fight, Riptide and its predecessor offer something rawer and rougher, an experience that's frayed at the edges but appealing in its crudity.

However with all these rough edges present, Dead Island: Riptide is really the kind of experience that needs to be shared to enjoyed, and indeed survived. Although you can play the Dead Island games alone, I found Riptide increasingly frustrating playing alone, not just because of the possibility of getting swamped, but because company makes the obnoxious characters and shoddier aspects of the game enjoyable rather than irritating.

As a group, crashing and dying midway through a boat mission and respawning miles back down the river while your boat stays inaccessibly upriver where it crashed would be a challenge, a bit of a laugh. Alone, such a quirk of shoddy design is almost impossible to work around, and phenomenally irritating.

If you've got a loyal gang of Dead Islsnd players and want to get the crew back together, Riptide is more of what you want, and retains the originals appeal freeform, chaotic appeal. Going solo, though, the franchise's charmless story and characters, and slightly shoddy production, continue to grate.

You can support Mark by buying Dead Island Riptide