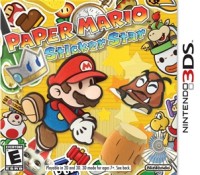 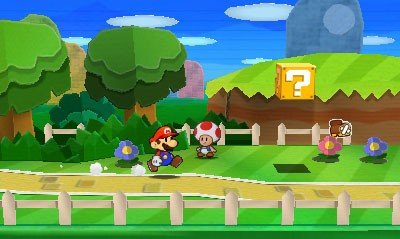 Paper Mario: Sticker Star has been released on 3DS and been provided for us to preview/review by the publisher.

"Paper Mario Sticker Star is a different approach to the Mario franchise, with turn-based battles, stickers to collect and a deeper adventure to uncover. In this FamilyGamerTV, we ask for the opinion of our kids, to see if this deeper adventure still appeals to young players..."
- Family Gamer (Sat, 22 Dec 2012)

The relationship between the Paper Mario games and the traditional genre-defining Mario platformers is tricky. Paper Mario: Sticker Star attempts to fuse Mario's classic platforming with roleplaying elements. Here, the turn-based combat returns after being removed for Super Paper Mario (Wii). However, instead of hit points and xp, Paper Mario upgrades his battle abilities by collecting stickers around the world.

Taking a cue from the ever-popular Trading Card Games, such as Pokemon TCG and Magic: The Gathering, the stickers in Paper Mario's album relates to abilities he can use. Stickers are laid down during battle to inflict damage upon opponents.

If you're new to the series and this all sounds a bit serious and intricate for a Mario game, fear not. The gameplay is as quick and addictive as other Mario titles and the battles, while turn-based, should still rattle through at a fun pace. Combine that with the beautifully quirky art and the usual joy-filled soundtrack and Paper Mario: Sticker Star could be a real winner. Plus, the visual style of 2D objects brought alive into 3D space looks like a perfect fit for the 3DS.

Paper Mario: Sticker Star is currently planned for release on the Nintendo 3DS on the 7th December 2012.


You can support Paul by buying Paper Mario: Sticker Star